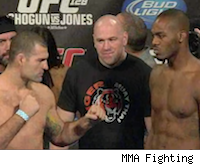 Barely sharing a glance, UFC light-heavyweight champion Mauricio "Shogun" Rua and challenger Jon Jones practically ignored each other during their brief time together at the UFC 128 weigh-ins. Jones, for one, was anxious enough to leave the stage that he started to leave before being called back to do a brief interview with weigh-in host Joe Rogan.

Saturday night, they'll have no choice but to engage in a fight that is expected to produce far more fireworks. Both champ and challenger came in at 205 pounds for the main event fight at Newark's Prudential Center.

"I think certainly Jon Jones is a great fighter," Rua said afterward. "He also has a lot of experience. But this belt is mine and it will keep being mine."

Rua has said little of note this week to the assembled press, but he did reiterate to Rogan what he told MMA Fighting's Ariel Helwani on Thursday, that he found the idea of Jones signing autographs with the word "champion" as disrespectful.

Despite the lack of interaction while they were together, Jones was animated by himself, roaring as he walked up the ramp and on stage to the scale. Flanked by his Muay Thai coach Phil Nurse and manager Malki Kawa, Jones made weight, then let out a primal scream on the scale while posing. Jones, though, was a little lower profile than he was a few weeks ago in his weigh-in pose with Ryan Bader. In that one, Jones was head-to-head with Bader, his neck veins pulsating from the adrenaline rush.

When the champ came out, however, Rua and Jones stood about two feet away from each for their brief pose.

"I feel great," Jones said. "This is the biggest opportunity of my life and I'm definitely going to execute this situation."

In a battle of former WEC champs, Urijah Faber and Eddie Wineland both checked in at 135.5 pounds for their bantamweight co-main event. Meanwhile, Brendan Schaub will have a 16-pound advantage in his heavyweight fight with Mirko Cro Cop, weighing 245 to his opponent's 229.