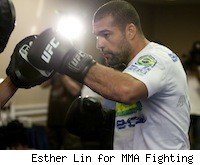 NEWARK, N.J. -- Rarely has a decorated champion taken a backseat to a challenger in a fight promotion the way Mauricio "Shogun" Rua has done during the lead-up to UFC 128.

With the emergence of Jon Jones, Rua, who won the belt last May, has somehow become the secondary player in their light-heavyweight tile fight. The challenger was installed as the favorite by MMA oddsmakers, dominated the fight week headlines, and the UFC even produced a 30-minute TV special on him.

Rua, who has said little this week while portraying a stoic demeanor, has even gone so far as to repeatedly suggest that Jones deserves his billing as the favorite and that he himself is the underdog. Considering his resume as a former PRIDE Grand Prix champ, current UFC champ and feared knockout artist, who's buying that?

"I think it's reverse psychology," Jones said. "He's trying to get me to believe my own hype, to get me to get comfortable, thinking, 'Yeah, I'm the favorite. Shogun's scared of me.' He's a smart guy, he's a warrior. Between him calling me the favorite and the Vegas odds, that plays no role on the way I'm thinking, the way I'm training. I know who Shogun is. I know that he's proven more than I have. I look at myself as the underdog just like he's looking at himself as the underdog."

Rua's face when he speaks gives little indication of his true feelings. Though he does speak some English, in press interviews, he usually speaks through his manager and interpreter Eduardo Alonso. He keeps his answers short and sweet, and always respectful.

But some of the things he says make it clear there is something simmering beneath the surface. Ask him, for example, if he feels disrespected by the perception that Jones will beat him.

"I didn't feel disrespected because he's been winning his fights soundly," he said. "I already was expecting the press and oddsmakers to consider him the favorite. He earned that. I really have to cherish the support from my fans for believing in me."

It's almost like he's saying, "I've seen this story before."

If that is what he's saying, he has a valid point. There's been plenty of fighters who've blazed through a series of opponents, lit the fuse of hope for fans, and then fizzled out. But there's also a few who proved every bit as brilliant as we believed.

Rua himself is one of them. Back in 2005, he was the kid on the scene, full of promise, when he pounded his way into stardom. There were probably doubters back then for him too, people who thought the same things about him that they think about Jones now. Rua didn't just jump the hurdle, he exploded through it. So he knows exactly what Jones is going through. He could put himself in Jones' mind if he wants to. He says he doesn't bother.

But Shogun also admits that as a 23-year-old making his real jump to the upper echelons of fighting, he had total confidence in his himself, trust in his abilities and skills. Since then, his game has only improved. On Thursday, he hit ... no, attacked pads in a workout room with a crackle that hushed the room. If you took a baseball bat and hit your couch as hard as you could, you might have an idea of what a Rua kick sounds like. It's that kind of power that has led to knockouts in 16 of his 19 wins. The man fights like a savage. That style does not just come from confidence, but pride and fearlessness.

Time and again, Rua answered the same questions gracefully, refusing to admit he should be favored, proclaiming his surgically repaired knee healthy, saying the late opponent switch had no effect on his camp.

Later, in discussing the fight, co-main eventer Urijah Faber would say that Rua is a one of the sport's great gentlemen. Nearly on cue, he switched tracks.

"That stuff aside, I think Jones is the man," he said.

There is no question many expect Rua to win. They are just harder to find than you might expect.

Rua knows he's doubted, but he probably also realizes he won't change minds just by talking. Still, he lingered around the workout room, doing interviews with the American press, the Brazilian press. And finally, after a workout, after a series of interviews that said almost nothing, the champ walked out with the stride of someone sure he would make the final statement.