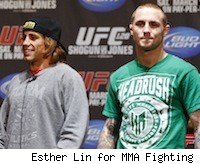 NEWARK, N.J. -- Between fights, the rumors came fast and furious for Urijah Faber. Was he going to face Dominick Cruz in a grudge rematch? Was he going to coach the next season of The Ultimate Fighter? Maybe the UFC would match him up with a contemporary who once ruled WEC's bantamweight title, Miguel Torres?

But when the time came, the decision was a wild card: Eddie Wineland.

The response from many fans was one word: Who?

Wineland is arguably one of the most anonymous of the former WEC champions who came over to the UFC, but it's not for lack of effort or success. The Indiana-based fighter has had memorable knockouts in each of his last two fights, and has captured six of his last seven. By comparison, Faber is 3-3 in his last six fights. Despite that, Wineland is a massive underdog as both bantamweights make their UFC debuts.

It's a fight that Wineland requested. Though he didn't ask specifically for Faber, he told the UFC's matchmakers that he wanted to make a run for the belt and hoped to fight a top three fighter in the division. When the UFC 128 offer came, his answer was immediate.

Faber and Wineland first met on what was at the time, the biggest night of Wineland's career. On that night back in May 2006, Wineland beat Antonio Banuelos to capture the WEC bantamweight championship. Back at the host hotel, where Faber and Wineland were in neighboring rooms, the two met and struck up a casual friendship. The fighters share a genuine respect as well as the same ultimate goal.

While plenty is known about Faber's background as a collegiate wrestling star at the University of California Davis, Wineland came to MMA from a much more unusual background: the world of bikes and motorcycles.

Wineland jokes that he rode a motorcycle even before he could walk. As a youth and teenager, he raced bikes, but gave it up around 17 because it was "too dangerous."

Ask him now and he'll tell you that it is in fact, far more dangerous than fighting in a cage for a living. To this day, the only time he's ever been knocked out was after crashing to the ground from 20 feet up in the air.

From the beginning of his MMA career, he constantly heard the same thing from people he trained with, that he has ridiculous power for a man his size (he's listed at 5-foot-7, and is about 155 pounds before cutting down to the bantamweight limit of 135).

"I don't know what it is, if I turn my hips or I'm unorthodox," he said. "I don't swing wide, I swing right. I corrected my punches and it seemed to be that they come harder and harder."

That power has to be there on Saturday night to give Wineland his best chance of victory. Over his last four fights -- all wins -- it's been there in abundance. He dropped both Manny Tapia and George Roop during decision wins. He knocked out Will Campuzano, then KO'd Ken Stone with a slam.

Faber, who has been TKO'd twice in 28 pro fights, says he's up to the challenge.

"The chin speaks for itself," he said. "Look at that thing. The No. 1 search on Google images for 'Butt chin.' I think I'll be alright."

Faber believes he's simply more well rounded than Wineland, and more able to improvise and adapt in the heat of a fight. But Wineland, who moonlights as a firefighter, knows a thing or two about keeping his cool under duress. He says he understands that most people see him as an underdog, but that this is a fight he deserves.

Wineland often spends up to three hours a day in his car, traveling from gym to gym. During that time, he thinks about nothing but fighting. So for weeks now, he's been obsessed with Faber and building a game plan to beat him. He's run the fight through his mind hundreds of times. He was a champion once, and a win over Faber could give him a chance to get the belt around his waist once more.

"I come in with confidence," he said. "Not overconfident, but I'm here to fight and have a good time. When I'm having fun, I'm dangerous. We're both very fast, both go 100 miles per hour. But how do you beat the guy who goes 100 miles per hour? You go 101. A win would mean everything. It'd be huge. A win over Urijah, it's big. It's kind of like instant stardom."