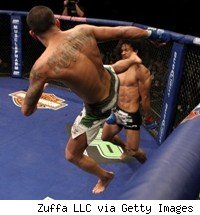 Rather than wait for the title rematch between Frankie Edgar and Gray Maynard, Pettis went ahead and accepted a fight against Guida to stay active, risking a title shot he earned last December when he defeated Ben Henderson for the WEC belt.

The TUF 13 finale takes place on June 4 at the Palms Casino Resort in Las Vegas.

Check out the current lineup after the jump.