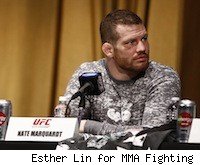 NEWARK, N.J. -- Nate Marquardt has always gone about his mixed martial arts career with a quiet class. He's never been one to trash-talk his opponent, and admits that about "95 percent of the time," he's liked the man standing across the cage from him on fight night. That holds true for his Saturday night opponent Dan Miller, who carries himself with a similar comportment.

Miller stepped up to fight Marquardt on one week's notice after Yoshihiro Akiyama withdrew from UFC 128 following the devastating natural disasters that struck Japan. And while Marquardt has his focus only on the task in front of him, he didn't hold back when he was asked if he was one of the many middleweights who hoped to get a crack at British contender Michael Bisping.

"I would love to fight that guy just to punch him in his mouth and shut him up," Marquardt said following a short workout. "That'd be nice. He's an ass, he's a total punk, just no respect. I don't like Bisping."

That's about as animated an answer as you'll ever get out of Marquardt, who is polite and well spoken, but doesn't exactly seek out pre-fight drama.

The middleweight, who is 30-10-2, said that he wasn't exactly a fan of Bisping's in the past ("I always thought he was a little bit of an ass," he said), but that the recent post-fight incident during Bisping's UFC 127 fight with Jorge Rivera crossed the line. After the bout, which Bisping won via TKO, he walked over and spit towards Rivera's coaching team. According to Rivera's team, Bisping's spit hit boxing coach Matt Phinney. According to Bisping, he just spit in their general direction as a sign of his anger for several pre-fight videos they produced ridiculing him.

Marquardt said that despite the trash talk, Bisping was in the wrong for his actions, saying he went "two steps too far."

"The crap talking and whatever, that's one thing," he said. "Guys hype up fights. And even guys that are just like that naturally, I don't hold that against them. But the fact that he goes and spits in his opponent's corner? That's so disrespectful. That's not what a martial artist does and it's not what a sportsman does."

Of course, to have a chance at Bisping, Marquardt will have to get past the durable Miller, who is 13-4 with 1 no contest following a two-fight win streak. Miller's never been finished, even during a rough streak in which he went to the final bell with Chael Sonnen, Demian Maia and Michael Bisping in losing consecutive fights.

Miller will also likely have the crowd behind him, hailing from nearby Whippany, New Jersey, just 20 miles away from the Prudential Center.

Aside from the pressure in winning a fight most people expect you to win, Marquardt is hoping to right the ship after losing a unanimous decision to Yushin Okami at last November's UFC 122. Afterward, Marquardt was criticized by UFC president Dana White, who said he "choked" in the fight. Marquardt says he's been asked about that in nearly every interview he's done since then, and is looking to put that moment in his rearview mirror.

"Like I always tell everyone, I'm my worst critic," he said. "The guys I need to listen to are my coaches and teammates. I knew I had to make some changes and I made them. You guys will see."

Still considered among the middleweight top 10, Marquardt is in a fight he has to win, with great stakes ahead of him.

"I believe I'm still at the top," he said. "I need to make a few minor adjustments and I'll be the champion. So I'm not really concerned where [a win] puts me. I know where I'm at and I'm just going to go out and do my best."