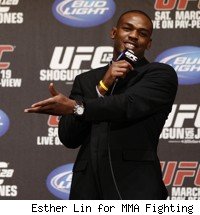 Jon Jones is continuing to make the media rounds and get treated as the Next Big Thing in the UFC -- even though it remains to be seen whether he's the UFC's next light heavyweight champion. The latest media event for Jones was a Thursday morning interview on SportsCenter, where he offered a surprisingly detailed account of his strategy for his UFC 128 bout with Shogun Rua.

Speaking with ESPN's Josh Elliott, Jones said he believes he's significantly better than Rua in the clinch, to the point where he thinks that when the two of them come together standing up, Rua won't be able to deal with him.

"I was a Greco-Roman All-American, and the clinch is such a huge part of combat sport," Jones said. "If you look at muay Thai matches, if you look at your traditional boxing, the clinch is huge. It's a natural instinct for people to clinch when they're in a bad situation. And that's one of my main strengths. My takedowns from the clinch are very powerful, my knees from the clinch are very powerful, and I think that can be a huge mismatch that I can exploit in this fight."

Jones' views on his advantages in the clinch tend to defy the conventional wisdom, which is that Rua's muay Thai background actually gives him some advantages over Jones in the clinch -- and that Jones' superior reach is what really helps him against Rua standing up. Jones addressed the reach issue as well.

"Shogun's really good with his head movement," Jones said. "I can see Shogun trying to slip punches side to side, maybe come over with a big overhand right, maybe slip in and come up with an uppercut or a left hook. But we're ready for that, not only using the reach but using my footwork to maintain the distance. I think that will be a big factor in this fight."

Ultimately, Jones said, he thinks he has the right game plan to have his hand raised on Saturday night.

"My biggest goal is to be UFC light heavyweight champion," Jones said. "That's right in front of my face."