Dan Miller on Fighting Nate Marquardt on Short Notice: 'If They Call, I Fight' 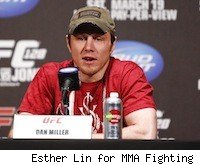 NEW YORK -- After losing three fights in a row to top-flight competition during a one-year span, many thought Dan Miller's days in the UFC were done. Instead, the New Jersey middleweight was granted a reprieve, one he's capitalized upon with back-to-back wins.

Why did he get another chance at a time when others are seeking new employment? It certainly doesn't hurt that he has an "anywhere, anytime" attitude to his fighting career. That approach has repeatedly proven invaluable to the UFC, and they tapped into Miller's gameness again this week. After originally being matched up with Nick Catone in a UFC 128 prelim, Miller got a call to replace Yoshihiro Akiyama after the Japanese star withdrew from the event following last week's devastating natural disaster in his home country.

Miller's acceptance of a bout with Nate Marquardt with just one week to prepare illustrates the dual nature of the short-notice fight. Though a loser of two of his last three, Marquardt is a high-profile fighter who remains considered one of the 10 best middleweights in the world. Because of that, Marquardt represents both a risky proposition and a breakthrough opportunity for Miller.

In an interview with MMA Fighting, Miller discussed taking the fight on short notice, what's at stake, and more.

Mike Chiappetta: Why do you think UFC came to you to take this fight?
Dan Miller: They know I won't turn a fight down, especially since I was training for a fight. I told them when [brother] Jim and I started, they can count on us any time. If they call, we'll fight. I don't think either of us has turned down a fight yet.

MC: Did you have to think about it this time?
DM: It could be a tough call depending on a few things, but usually it doesn't matter. Look at Jim, he once stepped in on eight days' notice after taking a month and a half off [against Matt Wiman, in 2008]. He didn't train for that long. He got married, had his honeymoon, then Thanksgiving, and they called him to fight. It's something we love, fighting. It's something I enjoy. it's 15 minutes of my life. I'm pretty sure i can go 15 minutes.

MC: Since you have that reputation and willingness, do you always keep in fight shape?
DM: I'm usually in fight shape, it depends on a few things. For example, after the Demian Maia fight, I broke my thumb and had to have surgery so i was out for a while, but most of the time, I'm right back in the gym a week or two weeks later. Usually I'm in shape and ready to go.

MC: Your originally scheduled fight with Nick Catone wasn't going to be broadcast at all, and now you're on the main card. Does that add extra motivation for you?
DM: It doesn't even matter to me. Obviously, it was one of the driving factors of the decision because I go from being first fight of the night on the undercard to fighting Nate Marquardt, who is in my opinion one of the top five middleweights in the world. He's just a fantastic middleweight fighter. And being on the main card getting this attention, I couldn't say no. But I don't focus on that. I don't think, 'Wow, there is going to be millions of people watching me.' I don't think about it. I think strictly about fighting Nate, that's it.

MC: That said, what does this high-profile opportunity mean to you?
DM: It means a lot, Leading up to the fight, being on a featured fight on a card like this is big. I get to do this [media]. I wouldn't get to do this if I was fighting Nick, not to this degree. I get to reach out to fans more so than I would have, especially fighting in New Jersey. It can't get any better.

MC: With seven days to prepare, how do you prepare?
DM: I didn't have any time for changes. We found out Saturday morning and I had one real session Sunday. I went in and continued training. How much can you really change now at this point, a week out? For me to start changing everything up, it wouldn't have worked. It would have confused me more in the ring. Now, I'm going to go in and react to what he gives me and hopefully come out with a win.

MC: Do you do any extra film work on his matches to have a better idea of his tendencies?
DM: For me, it's not really worth it. My trainers are going to be looking at the film and picking it apart. I'm just going in there to fight. It's exciting to me to fight someone like Nate. He's a great fighter and that's what I look for. I like stepping up and fighting those kinds of guys."

MC: Do you look at this opportunity as kind of a shortcut to get where you want to go?
DM: I would love to be a contender, to be considered a contender in the middleweight division. A win over Nate would put me right up there with the top 10 in the world. I've had a tough road coming in. I had three tough losses in a row, so a win over Nate would be huge.

MC: Nate's lost two of his last three. Are you catching him at the right time, or is he more dangerous because of it?
DM: I have to look at him like a wounded dog. I can't go in there complacent and think he's going to be laid back and more timid. He's going to give me everything he has. He's a fighter. He's going to come out and to try to take my head off. That's what he does. That's what he's been doing for a very long time.