With Jon Jones and Shogun Rua at the Forefront, UFC Takes Manhattan 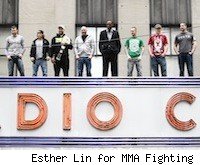 NEW YORK -- With freshman verve, Jon Jones marched on to the stage of Radio City Music Hall, in the City That Never Sleeps, on the Great White Way, and declared himself ready to face one of the most decorated light-heavyweights in the short history of MMA.

This is a town that prizes flash combined with substance, and the 23-year-old certainly looked and sounded the part. Dressed in a blue suit, Jones played to the boisterous fans, waving them on, taking a moment during the press conference to Tweet a picture of the assembled crowd, even accepting the request of a US soldier to walk him to the cage at UFC 128 on Saturday night.

In typical Manhattan style, one local asked Jones to stand up, then asked if he really thought he could beat champ Mauricio "Shogun" Rua. That set off a chorus of screams from fans, split on their loyalty to the main event fighters. Jones smiled and waited for the crowd to quiet.

"Come on, son," Jones shot back with a smile. "Absolutely."

It was a New York moment for a New York kid, raised upstate in rural Endicott but coming back to the city with the hope of making his bones -- no pun intended -- in front of the skeptics. Despite his opponent having more experience and a far more accomplished resume, Jones is a slightly less than 2-to-1 favorite for the main event, which takes place at the Prudential Center in Newark, New Jersey.

Rua, who was the PRIDE Grand Prix champion and a Brazilian jiu-jitsu black belt well before Jones ever began his first day of training for the sport, said Jones should be the favorite, and that their styles would generate a more thrilling fight than the originally proposed bout with Rashad Evans, who was forced out due to injury.

"Rashad is a guy who likes to control the fight a little more, play it more safe," Rua said through his interpreter and manager Eduardo Alonso. "Jones is a more exciting fighter, he looks to finish and brings a hard fight. That's the kind of fight I like."

Jones nodded in agreement, the showman tacitly acknowledging his duty in entertaining the fans. That was the order of the long day for Jones, who woke up at 5 am to do a morning show interview and has media priorities throughout the day to go with his two training sessions. But the possible heir to the light-heavyweight throne was happy to do his part to continue the push to get MMA regulated in the Empire State.

Yesterday, UFC president Dana White and executive Lorenzo Fertitta visited the state capital to lobby legislators, and the full-court press continued with New York City Council majority leader Joe Rivera firing up the Radio City crowd by promising to push the fight for sanctioning, then the fighters in attendance made their final statement with a photo atop the world-famous theater marquee.

Rua coming as Jones' last obstacle on the way to a UFC title is somewhat ironic, given that Rua was one of the key fighters that Jones studied as he trained to become a pro in early 2008. Jones made his MMA debut in April 2008, and a rise from fighting on local shows to becoming world champion in less than three years seems somewhat improbable. Yet that's exactly the story that he hopes to write on Saturday.

It would mark a parallel storyline to that of Rua, who similarly rose to international MMA prominence as a 23-year-old when he captured the PRIDE Grand Prix title with consecutive wins over a murderer's row lineup consisting of Quinton "Rampage" Jackson, Antonio Rogerio Nogueira, Alistair Overeem and Ricardo Arona.

Jones has never beaten any fighter of that caliber -- his best wins have come over Ryan Bader, Brandon Vera and Stephan Bonnar -- yet the dominant fashion of victory that has threaded through his fights has made believers of many that Jones could MMA's 2.0 model.

A smiling, happy Jones has willingly come along for the ride, seemingly aware of the pitfalls of believing the hype.

"I don't look at it as distractions," he said. "I'm enjoying the ride and being grateful of where I am today. It's a dream come true. I'm enjoying the whole thing. I'm still training two times a day even while I'm tweeting so much. It's just fun to be here. I've meditated a lot on victory. I'm in tune with what's going on and enjoying the ride."

In contrast to Jones' happy-go-lucky style, Rua struck a more serious tone, rarely smiling, but he couldn't contain himself at one point of the proceedings when vocal fans began screaming his nickname.

Not to be outdone on the entertainment scale, Rua -- a native Brazilian who usually speaks only in Portuguese -- saved his one English answer for a question on how he prefers to finish the fight.

"Knockout," he said, to a loud ovation.