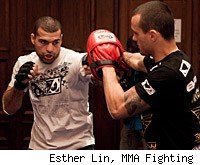 The light heavyweight title is on the line in what looks like it will be one of the best top-to-bottom fight cards of the year in mixed martial arts at UFC 128 on Saturday night. My pay-per-view predictions are right here.

When: Saturday, with a Facebook stream starting at 8 p.m. ET, the Spike TV undercard fights at 9 and the pay-per-view at 10.

Maurício "Shogun" Rua vs. Jon Jones
Some people think it's too early to throw Jones into a title fight, but I disagree. Just because Jones is only 23 years old doesn't mean he's not already among the truly elite fighters in mixed martial arts. He's absolutely torn through everyone he's faced, and there's no reason that he shouldn't get a chance to step into the Octagon with the best the UFC has to offer.

Having said that, I'm not sure that Jones matches up real well with Rua. Jones loves to throw his opponents onto their backs and pound them on the ground with horizontal muay Thai, but he's wild with his strikes on the top. A sophisticated Brazilian jiu jitsu black belt like Rua can take advantage of Jones' sloppiness from the top, and I wouldn't be surprised to see Rua catch Jones in an arm bar or knee bar.

I also wouldn't be surprised to see Rua pick Jones apart standing up: In Rua's Pride days he was absolutely lethal as a striker, and although I don't know if he's quite as explosive now as he was then, thanks to his multiple knee surgeries, I think he's more technically proficient now. The way Rua fought Lyoto Machida standing up was masterful, and Jones has never faced anyone who can attack him like that.

So as much as I admire Jones as a fighter, I think Rua has the advantage whether they stay standing or go to the ground. I believe Jon Jones will be the UFC light heavyweight champion some day, but that day will not be Saturday.
Pick: Rua

Urijah Faber vs. Eddie Wineland
Faber is the most popular fighter to come over to the UFC from World Extreme Cagefighting, and now he's making his UFC debut in a fight that, should he win, will likely earn him a shot at Dominick Cruz's UFC bantamweight title. Wineland was the first WEC bantamweight champion, and if he can pull off the upset and beat Faber, he'd be on a five-fight winning streak and close to title contention himself.

Wineland is a dangerous puncher who won the Knockout of the Night award in his last two WEC fights, and he shouldn't be written off against Faber. But I do view this as Faber's fight to lose, and I think he'll take a big step toward fighting for a UFC belt.
Pick: Faber

Jim Miller vs. Kamal Shalorus
Miller doesn't get enough credit as one of the elite lightweights in MMA. His record is 19-2, and his only two losses were decisions to the two best lightweights in the world, Frankie Edgar and Gray Maynard. He's one of the best in the world, and he ought to be close to a shot at the belt. Shalorus is a great wrestler and strong as a bull, and he could give Miller some matchup problems, but I expect Miller to grapple his way to a unanimous decision win.
Pick: Miller

Dan Miller vs. Nate Marquardt
Dan Miller, Jim's brother, agreed on just a week's notice to change opponents and fight Marquardt, filling in for Yoshihiro Akiyama, who had to pull out of the fight after the earthquake in Japan. I respect Miller for being willing to step up and take the fight, but I don't think he has much of a chance of beating Marquardt, who's a cut above anyone Miller has ever beaten. Miller does have a better jiu jitsu game than Marquardt, and it's not unthinkable that Miller could get Marquardt to the ground and make him tap, but it's much more likely that Marquardt's superior striking gives him a one-sided win.
Pick: Marquardt

Mirko Cro Cop FilipoviÃ„Â‡ vs. Brendan Schaub
A win over Cro Cop would be the highest-profile victory of Schaub's career because Cro Cop is such a legendary figure in mixed martial arts. But let's be honest: Cro Cop just isn't all that good anymore. Hit Cro Cop hard enough, and you can make him quit. That's what Schaub will do.
Pick: Schaub