The Making of Jon Jones 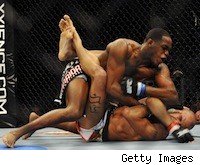 Everything will work out as God plans it, he says to himself, and walks ahead with faith and positivity. Suffer a setback? Move forward. Facing adversity? Plow ahead. Fight a legend on short notice for the world championship? You better believe it.

This whole thing, after all, started with faith. Jon Jones was just 20 years old back in the winter of 2007, going into 2008, when he found out he was about to be a father. Jones, the defending junior college national 197-pound wrestling champion, decided he was done with school. Now, he had to be a provider. That commitment had to come before anything else.

Fighting was the means to provide chosen for him, and in this belief, he did not waver, even when reminded it took years to make big money in MMA. "It will all work out," he often told people. And so it was that on the day his girlfriend Jessie went into labor with their first child, Leah, Jones was 250 miles away, on the road to Atlantic City, New Jersey to fight. Faced with the prospect of missing his child's birth, Jones contemplated on the decision. Of course he wanted to be there, but the odds of returning in time for the birth seemed remote, and his family needed the money. The decision was made: he would stay and compete.

After listening to his daughter's birth on the phone in his hotel room, Jones went out and won his sixth fight in exactly three months. It would turn out to be the most important of his noteworthy run. Within two weeks, he would be signed to the UFC.

At the time, Jones had been training in mixed martial arts for just eight months and competing for just three, yet here he was signing on to the world's biggest promotion. It wasn't supposed to work this way. The sport is too layered, too complex.
He's the type to practice [a move] once and then hit it in competition.
-- Ryan Ciotoli
His first UFC opponent, Andre Gusmao, was actually the more hyped prospect of the two when they met in August 2008.

"With Jon the big question was, 'How can he be ready after competing for three months?'" said Ryan Ciotoli, who trained and managed Jones in the early part of his career. "This is modern-day MMA. Maybe 10 years ago that was acceptable. In the modern era, it's not only unheard of, it's dangerous. Everyone in the UFC is pretty good at jiu-jitsu, wrestling and striking. Everyone trains everything all the time. But I was confident. Jon was confident."

To the surprise of many, Jones won by unanimous decision, and was on his way. Ciotoli, though, had unique insight into the rising phenom. The two were from the same area, and wrestled at the same high school -- Union-Endicott -- though years apart. He'd followed his career through a high school state championship, junior college run, and then recruited Jones to his Bombsquad fight team when he heard he was finished with school.

From the start, Jones' wrestling abilities could not be denied. He could take down anyone at will and he rarely found himself on his back. But unlike other wrestlers who stick to what they know, Jones immersed himself in the other parts of MMA immediately.

Ciotoli would often open his home to Jones, who he would regularly find sitting at the computer, watching fights. Ciotoli was struck that by the fact that Jones might one day be watching a legend of the sport, and another time be watching a seemingly random fighter he'd never heard of. Either way, he'd be just as intent, analyzing the bout for something he could adopt into his own arsenal.

"There are a lot of guys who have to get in the gym and practice it 1,000 times before they use it," said Ciotoli, who also helped guide fighters like Tamdan McCrory and Mike Massenzio into the UFC. "He's the type to practice it once and then hit it in competition. Everyone knows the spinning elbows and creative things he's come up. He can see it once and do it in a fight. He's the only one I've seen in MMA that can or will do it. He's fearless."

It's a common thread about Jones, even from the time of his boyhood. Jones first tried wrestling in the 7th grade, alongside his brother Arthur, who is now a 6-foot-3, 313-pound defensive tackle on the NFL's Baltimore Ravens.

As his then-coach Jack "JJ" Stanbro recalls it, Jones was a "stick-thin, little goofy kid" with a mischievous side but a good heart. While Jones is adamant that he's a terrible athlete, unable to dribble a basketball or hit a baseball, it was quickly apparent to Stanbro that there was something special about him on the wrestling mats.

He remembers that because of Jones' length -- his current 84.5 inch reach is a UFC record -- opponents would try to attack him with a Russian 2-on-1 move that isolates one arm in hopes of slowing down speed and negating reach. To counter it, they showed Jones a difficult technique that required a 360-degree spin. Jones immediately mastered it and applied it in his matches.

The Jones boys always liked to wrestle, following in the footsteps of their dad, a Pentecostal pastor who himself wrestled in high school and encouraged their interest. Jon's competitiveness and athletic drive was at least partially born of his childhood. He and brother Arthur, who was one year older and much heavier, frequently broke into wrestling matches to settle arguments. Arthur would go on to win two New York state wrestling championships before focusing on football in college.

Jones turned heads from the beginning of his pro career. In his first match, which took place at a Holiday Inn in Boxborough, Massachusetts, only about a minute into his fight with Brad Bernard, he used a lateral drop to throw Bernard, landed in side control and finished the fight with strikes. The whole thing lasted just 92 seconds. A star was born.

"Quite honestly, going into that event, I didn't know who he was as he was making his pro debut," said Peter Czymbor, who did play-by-play for the event, Full Force Untamed 20. "But by the end of the night, there was only one thing everybody was saying to you: 'Hey did you see him flip that guy?' It was the most impressive move of that entire night. It was the only thing people remembered."

Jones quickly became a student of the game, focusing just as much on often ignored transitions as flashy offense. He eventually started training with Team Greg Jackson occasionally, then made the gym his permanent home. During his time there, one of the biggest changes he's made has been to his body. When Jones joined the gym prior to his UFC 100 fight with Jake O'Brien, he weighed 220 pounds with 15 percent body fat. Working with strength and conditioning coach Kelly Tekin, he has remade himself into a more efficient fighting machine. Prior to his UFC 126 camp for Ryan Bader, Jones weighed 222 pounds and had just eight percent body fat, meaning his muscle mass increased by 18 pounds in less than two years.

Tekin says for that first camp, Jones came to him in "horrible" shape.

"We thought, 'Oh God, I don't even know if he can get ready in time,'" Tekin said. "He'd never done any weight training and his endurance was not real good."

For that particular camp, Tekin concentrated mostly on conditioning, but over the last 18 months or so, the pair worked hard to add strength and power, focusing on his legs. Tekin tested Jones, looking at his hips, shoulders and other body parts to see if everything was firing properly, and then working to realign and strengthen them. While the pair focused on physical drills, they also went through visualization exercises together.

"He has an awesome work attitude," she said. "He's very humble and and puts everything into what he does. He wants it to be 1000 percent right, and if it's not, he keeps working at it or goes home, thinks about it and comes back and does it right."

After defeating Brandon Vera via TKO due to elbow strikes -- blows which broke three bones in Vera's face -- Jones credited his hard-earned strength gains for allowing him to finish a durable fighter.

Continued work with Jackson, striking coach Mike Winkeljohn, Muay Thai coach Phil Nurse and others has helped his standup game approach the level of his wrestling. In his last fight, he landed a head kick that dazed Bader in the first, then kept him off-balance by repeatedly switching from southpaw to orthodox. According to Compustrike, in his last three fights -- against his best competition -- he's been hit only nine times by standing strikes. Champ Mauricio "Shogun" Rua will certainly test him in the category, even if oddsmakers and bettors have made Jones the favorite.

Wrestling, however, will always be his base. In his last fight, he wore his black and orange "Tigers" high school wrestling jacket on his walk to the cage, and had Stanbro in his corner. He walked ahead, his theme song thumping 50 Cent's "God Gave Me Style" over the arena speakers. The final words: "God made me shine like the sun. Sometimes I feel like I'm the one." He walked ahead, the son of a preacher, following God's plan, accepting the path laid out for him.

For the father, faith and sport were separate passions. For the son, they are intertwined; the ingredients, he hopes, that make a champion.