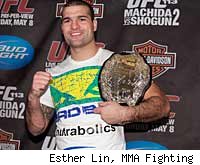 Mauricio "Shogun" Rua, Jon Jones, UFC president Dana White and others will be in attendance to discuss this Saturday's UFC 128 pay-per-view.

-- Schaub receives the award and that concludes the UFC 128 press conference.

-- Brendan Schaub is the winner of the Tequila CAZADORES Spirit Award

-- A fan asks what he has to do to walk out with one of the fighters. White asks if Jones wants to take the question. Jones says the fan can be his cornerman.

-- If Shogun loses on Saturday, he keeps the physical belt he's holding to now and Jones gets a new one.

-- A fan asks about a Bruce Buffer-cam. White laughs and ask if Buffer put him up to it. "We'll see," White says.

-- MikeChiappetta Jon Jones: "Me talking about fightin Anderson Silva is like staring at 2nd base when the baseballs coming my way." Great quote.

-- White: "Shogun is one of the nastiest fighters to ever compete in mixed martial arts"

-- More than winning the belt, Jones wants to be an inspiration to others.

-- Shogun isn't bothered by his underdog status via oddsmakers and says Jones is rightfully the favorite.

-- Shogun is asked if Evans punked out of the fight. Shogun says that's not true and injuries happen in MMA.

-- Jones uses visualization to mentally prepare for facing Shogun in the cage.

-- Due to timing of Jones replacing Evans, Shogun's preparations didn't change too much outside of finding lengthier sparring partners.

-- Eddie Wineland on being the heavy underdog vs. Faber: "Anyone who counts me out is a big mistake."

-- Shogun agrees he shares similarities in how they rose at such an early age, but says they are different as fighters.

-- After what happened in Japan, Dan Miller says it's bittersweet for him to get the opportunity to step in for Akiyama and he'll try to make the most of it.

-- UFC 128 presser has begun. Councilman Joel Rivera is behind the podium encouraging the legalization of MMA in NY.