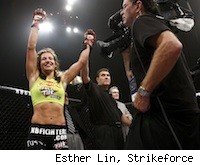 Of all the Strikeforce fighters who are struggling to figure out what the sale of their employer to its biggest rival will mean for them, it's the women on the roster who are in perhaps the most precarious position.

Despite UFC president Dana White's assurances that it's "business as usual" for Strikeforce after being purchased by Zuffa, the female fighters now find themselves working for a company that is owned in part by a man who isn't a big fan of what they bring to the table. As you can imagine, it's a situation that makes some of them very nervous about the future of women's MMA in general, as well as for their own jobs.

"I am a little worried," said 135-pound Strikeforce fighter Miesha Tate. "I just don't know what's going to happen. Now we're all under Zuffa, and the one man who's the big voice there can't appreciate women's fighting."

In the past, White has made no secret of the fact that he's not interested in getting into the business of women's MMA. He's said publicly that he has no intention of ever adding female fighters to the UFC roster, and on Monday's media call White said his thoughts on the women's division now are "the same as they were before," adding "that's Scott [Coker's] deal."

That's fine for now, when, according to everything coming out of the Zuffa offices, Strikeforce will continue to run its own promotion as it sees fit. But what will happen to women's MMA if Strikeforce is eventually – like past Zuffa acquisitions – folded into the UFC?

"I think one of two things can happen," said former Strikeforce champ Sarah Kaufman. "The first is that they embrace the females and still try to push them using the Strikeforce venue and then maybe pulling them over [into the UFC]. That would be great, if that were to happen. The second option would be, they run the contracts out and then that's it. I'm definitely hoping for the former, but I'm preparing for the latter."

For the optimists among them, the sale of Strikeforce looks like a potential boon for women's MMA. As current Strikeforce 135-pound champion Marloes Coenen sees it, the UFC's promotional expertise can only help Strikeforce, which will in turn help the women on the roster.

"I believe that with the knowledge of the UFC, Strikeforce will grow even larger," said Coenen. "If Dana and the others see that women can bring him money, it will be good for us. What we need are the role models like Gina Carano and Miesha and hopefully me, as well, that women can relate to. ...I truly believe that if they can get the women's audience, and if they can identify with a girl next door like me or Miesha, then the female fanbase, which is way more loyal than the men are, will only grow from there. That's the way I think Dana and Zuffa should look at it."

At the moment, however, there's no indication that White's position on female fighters is changing. He's said in the past that there aren't enough female fighters to create a lasting division, leaving some of Strikeforce's women wondering what it might take to change his mind.

"I honestly don't know what else could be done," said Kaufman. "There have been some really exciting fights that the females have put on. I'm positive that Dana White and [UFC matchmaker] Joe Silva and the whole crew have kept an eye on shows where there are female fights, and I'm sure they know that there are some good female fights out there. Dana tries to use the point that the divisions aren't deep enough, and that is changing, but we need the opportunity to fight and promote and get more females into the sport."

While Coenen acknowledged that "the next six months will be crucial" in demonstrating the strength and vitality of women's MMA, she isn't worried that female fighters will be left out in the cold when everything is said and done.

"I have to have faith, because I believe we bring such a good thing into the world of MMA," said Coenen. "If we can show what women can do and inspire other women even just to start working out, it will help so many women in their lives. I refuse to think that [Zuffa] couldn't see those benefits of women's MMA."

Others, such as Tate, who is slated to be the next challenger for Coenen's Strikeforce title, don't necessarily share her optimism.

"I know Dana White isn't a huge women's fighting advocate at all, and I know he's saying he'll honor the contracts, so immediately I don't think anything is going to change," said Tate. "But I'm a little concerned about when renegotiations come around for the women. I don't know how he's going to weigh our value and how we're going to get paid. I'm also more concerned about the big picture when the Showtime contract ends for Strikeforce. That's when I think there's going to be some big changes."

If Strikeforce does eventually go the way of Pride and the WEC, it could be a huge blow to the viability of women's MMA across the board. That is, unless the women can make their point to the Zuffa brass before then.

The way Kaufman sees it, in the end it might come down to how passionately MMA fans feel about the women's division.