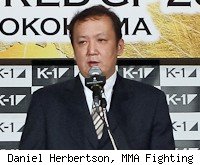 In response to the crisis in Japan following the March 11 Sendai earthquake, FEG President Sadaharu Tanikawa released a statement on Tuesday via the K-1 website, encouraging victims to stay strong.

Mixed martial arts is the last thing that most people in Japan are thinking about at this time but Tanikawa also addressed the health of Japan fight sports, admitting that following the disaster and the Zuffa purchase of Strikeforce, this is the hardest time that Japanese fight sports have ever experienced.

Tanikawa's full statement is after the break.

First of all, I would like to express my condolences to the victims of the disaster. The victims and their families must be going through hell now. Please, stay strong and overcome this tragedy. I hope you will be able to return to normal life soon.

As we can all see, this disaster has caused massive damage to Japan. All we can do right now is to encourage people by harnessing the collective power of fight sports fans. Another major local organization SRC has stated the possibility of withdrawal from the scene. Additionally the organization we work closely with, Strikeforce, has been purchased by Zuffa/UFC recently. We have to say, fight sports in Japan is currently going through the hardest time that we've ever experienced before. However, we are not giving up! We know we have to keep moving forward. We will do our best to make it. So please stick by us, and support us.

We have received many messages from fighters, promoters and fans since the tragedy. It really shows their love for Japan and the Japanese fight sports scene. Now we are determined to fight for them! We will keep on updating these special messages from fighters to our official website, Twitter and Facebook. We hope these messages will go some way to cheering up the people of Japan. Let's unite and overcome this adversity!

Additionally, FEG have compiled messages of support from fighters all over the world including Fedor Emelianenko, Ernesto Hoost, Nick Diaz, Alistair Overeem and many more.

It hasn't even been one week since unfathomable disaster struck Japan, World Victory Road announced the inevitable end of Sengoku and Zuffa bought DREAM ally Strikeforce. Despite Tanikawa's words of encouragement it seems increasingly unlikely that Japanese MMA will recover at all over the next twelve months. Sponsoring and promoting mixed martial arts when a significant portion of the country is in dire need of support seems ludicrous at the moment but Tanikawa's positivity and ambition to move forward despite tragedy is certainly indicative of the sentiment of the Japanese people.