UFC Will Give Fans What They Want, Which Means Strikeforce Superfights 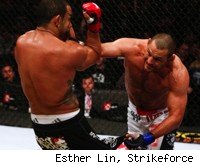 But make no mistake: Superfights are on the way.

White and UFC Chairman and CEO Lorenzo Fertitta both said in announcing their merger on Monday that they view their job as giving the fans the fights they want. And there's just no way to accomplish that goal without eventually booking Strikeforce champions against UFC champions.

"Our job is to make sure the fans get the fights they want to see," White said. "It's just a matter of when."

However, when White says "it's just a matter of when," he's all but acknowledging that as soon as those contracts expire, the best guys from Strikeforce will be making a move into the UFC.

That is, after all, what the fans want: Whoever wins the Strikeforce Heavyweight Grand Prix, fans will be in a lather to see that fighter take on the best the UFC has to offer. You'd have to be crazy to think the UFC wouldn't want Alistair Overeem vs. Cain Velasquez, or Antonio Silva vs. Brock Lesnar, or a Fabricio Werdum vs. Junior dos Santos rematch as a pay-per-view main event.

"If the fans want to see it, as Dana says, that's what we do," Fertitta said.

When the UFC purchased Pride, it immediately installed Dan Henderson as the No. 1 contender in both the light heavyweight and middleweight divisions because he had been the Pride champion in both weight classes. The purchase of Strikeforce won't necessarily mean all five of its champions become the No. 1 contenders in the UFC, but it will eventually mean the titles are unified in fights that will be among the biggest in the sport over the coming years. It's only a matter of time before giving the fans what they want means giving the fans one unified champion in each weight class.