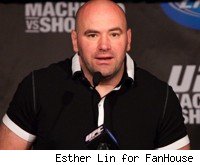 MMA Fighting has live Twitter updates of Monday's conference call held by Zuffa to announce the acquisition of Strikeforce.

Editor's Note: The call has ended and updates are in reverse order.

Lorenzo says he doesn't feel there's a year-round presence in int'l markets & that's something they want to do, so they needed more fighters

Dana: All the things we do here in the US and Canada, we feel we can do it in all kinds of international markets.

Dana: Regarding champ vs. champ fights, our job is to make sure fans get fights they want to see. It's just a matter of when.

Dana: I love the fact we make it easy, but this is a very, very difficult business to be in.

Lorenzo: I hadn't heard SF was negotiating with anyone else. That was news to me when I heard it.

White: "A union is up to the fighters. But this really isn't a team sport. Will guys making big money want to kick money down to others?"

Lorenzo: We have nearly 4,000 fights in our library after acquiring Strikeforce's library.

Coker: When you think about history of MMA, I'm proud of our accomplishments. This is going on now, is real & is good for martial arts.

We haven't put in plan for Japan yet. Scott has deals. We'll look at landscape and see if they make sense.

Lorenzo feels there is no MMA monopoly. "No barrier to getting into the business."

There's been no talk of a UFC fighter vs. Strikeforce fighter yet, none.

Dana: A lot of people on that side of fence who aren't fans, but we can still do business. They can deal with Scott or Lorenzo.

Dana: "There's a lot of demand out there" as far as places asking for cards (Ireland, etc.)

Dana admits they dont really know what will happen in distant future. "It's all a work in progress."

Lorenzo says Showtime deal goes into 2014, not into 2012 as has been reported.

Lorenzo confirms elbows on the ground will be legal.

Dana: I wouldn't count anything out, including superfights. Lorenzo: If there's an interest, that's what we do. That's a change from Sat.

Lorenzo says they'll continue to use the Strikeforce cage. They will use unified rules tho (I guess that means elbows now OK)

Lorenzo: "Painting this picture that there are not other options (for fighters) is entirely untrue." Mentions other options across the world

Lorenzo: "It's a positive for fighters working for a company like Zuffa w/vast financial resources. Good for them to be with a healthy co."

Dana: "There's always going to be competition. There are hundreds of shows everywhere, all over the world"

Coker says there are about 140 fighters under contract to #Strikeforce right now.

Dana on possible future merger: "Anything's possible, I would never say never to anything in the future. #UFC #Strikeforce

Dana: We're looking to run SF shows on Showtime. Scott will run this and communicate with fighters.

Coker says his partners wanted to get back to core biz, hockey. And he wanted to stay in MMA business.

Coker: This is a historical day for the sport of MMA. It's something we thought long and hard about... SVSC wanted to get back to hockey biz