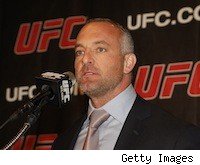 With UFC parent company Zuffa swallowing up its biggest competitor Strikeforce, the dynamics of competition around the mixed martial arts world shifted in a way the sport has never seen. There isn't a single promotion anywhere on the globe that can come close to matching the scope of Zuffa's breadth and reach. The company now has television deals with Spike, Versus and Showtime, is the biggest pay-per-view provider in history, and could potentially tap into existing relationships with Strikeforce partner CBS and new Comcast partner NBC.

Yet despite the sport's 800-pound gorilla adding on further muscle, company bosses Lorenzo Fertitta and Dana White deny that the company has a monopoly on the MMA business.

On a Monday conference call officially announcing the transaction, Fertitta, a co-owner of parent company Zuffa as well as UFC executive, dismissed talk that the deal could open the promotion to anti-trust issues.

"We wouldn't have done the transaction if we felt we would," he said. "I think at the end of the day ... there are literally thousands of other promotions, thousands of options for fighters. It just so happens with the groundwork we've put in place over the last 10-11 years, we happen to be the most successful. There's plenty of competition and there's literally no barrier to entry. Anybody who wants to get in the business, they can go file for a promoter's license, put up some capital, go sign some fighters and go get a television contract. There's plenty of options there, too. It's a wide open market for anybody who wants to get involved."

With UFC and Strikeforce under the same umbrella, Bellator becomes the next largest U.S. MMA promoter by virtue of its national cable deal with MTV2 and ambitious tournament schedule.

Countless other regional and state promotions currently exist, but none have the resources to rival Zuffa, or even to compete with them for the best available fighters.

For now, Zuffa says that UFC and Strikeforce will run independently of each other and with separate budgets, but because they are under the same umbrella, many fighters will feel as though there are less options to earn a paycheck. That view could lead some of the sports' athletes to attempt to unionize and strengthen their bargaining position with Zuffa.

"I think that's up to the fighters, if the fighters wanted to get together and do a fighters' union," White said. "The problem with that in the fight business is this isn't really a team sport. I don't think you're going to see some of the guys who are making the big, big money wanting to kick some of their money down to these guys who might never make it or might never be. But that isn't up to us, that's up to them."

Among those who might be affected by the deal are Strikeforce fighters with non-exclusive deals who have historically been able to compete elsewhere internationally. While Zuffa contracts have historically been exclusive, White and Fertitta reiterated that all existing contracts would be honored, and that Strikeforce CEO Scott Coker would continue to manage those relationships. According to Coker, the fighters under such deals will remain subject to the same terms they faced when Strikeforce was independently owned.

"Alistair Overeem's deal and a lot of other fighter deals, even though they were allowed to fight in Japan, we always had booking priority and had to give approval," he said. "So it wasn't a free reign of a contract. That won't change. With Alistair and the other fighters, they've always had to have approval regardless."

Zuffa executives continued to say things would be "business as usual" while also admitting the transaction was so new that many future plans have not been thought out. The landscape of the sport is certainly going to be different for fighters and fans, we just don't know yet how different it will be.

What we do know is that Zuffa is now the home of nearly all of the world's top ranked fighters, with a few notable exceptions. In their view, there is no MMA monopoly, but they nearly have a stranglehold on the sport's top talent. Can anyone step into the void? There have been many who have tried to challenge them in the past. In White's office, he has what is essentially a toy tombstone with the names of those who have done so and failed: the IFL, EliteXC, Affliction. They can try, but the bigger the UFC gets, the harder it's going to be.

"That's one of the things about getting into this business. That's the risk of this business. I love the fact that we make it look easy," White said. "This is a very, very difficult business to be involved in. As Lorenzo said, there's no barrier to entry. All you have to do is get some capital, get ready, jump in."