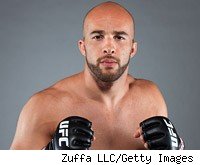 Some fighters will tell you that they never read MMA news on the internet. Some will even mean it. It's a distraction, they say, and the various things they might read about themselves – whether positive or negative – won't do anything to help them on fight night.

But as Eliot Marshall found out recently, for an unsigned fighter trying to get back into the UFC, sometimes the up-to-the-minute online reports are a resource too valuable to ignore.

Marshall, who got cut from the UFC around this time last year following a split decision loss to Vladimir Matyushenko, said he read online that fellow light heavyweight Luiz Cane was in need of an opponent for UFC 128 when Karlos Vemola pulled out with an injury.

"I saw that Luiz Cane's opponent fell off and got hurt and they didn't have an opponent for him, and I knew that two other 205-[pounders] that week had fallen off, so I was like, here's my opportunity," said Marshall. "So I contacted my management and told them, let's get on this."

And 'get on it' is exactly what his representation at Alchemist Management did. At around three p.m. Marshall read the news and contacted his management. By seven or eight p.m. that same day, he said, he was back in the UFC and had a fight on this Saturday night's UFC 128 card, which, when Marshall got the offer, was less than a month away.

"I'm so proud of him," said Marshall's coach at Denver's Grudge Training Center, Trevor Wittman. "He didn't have a fight coming up, but he stayed in the gym, stayed in shape and ready, and it paid off."

At least, it paid off in the form of an opportunity. Marshall still has to perform in the fight, and against an aggressive opponent who loves to come forward and, in Marshall's words, "chuck that big left hand."

"I'm practicing to walk right into it right away and see what it feels like, see if I'm still awake after the first couple," he joked. "If I am, then hey, phenomenal."

He may be laughing now, but the truth is Marshall is the last person who needs to be reminded of the importance of every single fight in the UFC.

He won three in a row during his first stint in the Octagon following his 'Ultimate Fighter' appearance. But one split decision loss in one fairly tedious fight – the fight with Matyushenko was "on the boring side," Marshall admitted – and the UFC didn't hesitate to cut him even while retaining the services other fighters with consecutive losses under their belts.

"It felt unfair at the time," said Marshall. "It did. But they're my bosses again. They can do what they want to do. This is the game we all play, and it's not like we don't know that. It's not like they say, 'These are the rules,' and then they break them. They can do whatever they want, and we signed up for it. No one's forcing me."

After getting released, Marshall won two straight fights in small Denver promotions, which he hoped would get the UFC's attention. His management approached matchmaker Joe Silva about getting him back in the organization, Wittman said, and they were quickly rebuffed.

"[Silva] said, 'He won two fights and they were both boring. Tell him to go out and finish someone.' And he did," said Wittman.

In December of 2010, Marshall won a first-round submission victory over Chris McNally at the Nemesis Fighting event in the Dominican Republic. It was the impressive finish he needed, but he still couldn't be too happy after the win. The promoters never paid him for that fight, he said, so while he'd gotten the quick victory he'd been looking for, he also did it for free.

It proved to be an oddly fitting end to a trying year for Marshall.

"It was a year of fighting and a year of being sad and upset," he said. "Man, I was sad for a long time. I couldn't quite wrap my head around it. I wasn't in the UFC anymore. People would come up and talk to me, like, 'Oh, I know you. You're in the UFC.' And I'd have to be like, 'No I'm not.' It was a rough thing for me. It was a challenging year."

Now that Marshall is getting his short-notice shot to prove he's deserving of a place on the increasingly crowded UFC roster, you'd think the pressure might be getting to him. All it took was one loss to negate his three-fight win streak and send him into the ranks of the unemployed, so the Cane fight would seem to be a must-win.

But if Marshall is feeling the heat, he's doing his best not to let it show.

"Honestly, I have no urgency," he said. "I've experienced my worst fear: getting cut by the UFC. It's already happened, so I know exactly what it's like. So I'm not afraid of it anymore. It used to petrify me. I used to think, I can't lose this fight or I'll get cut. I think that made me fight a little more not to lose than to go out there and get in somebody's a--. Now, if I get cut again, okay. I'll move on with my life."

At least now, Marshall pointed out, he has a chance to get some closure on the situation. He gets to find out for sure whether he has what it takes to stay in the UFC. Whatever the answer to that question might be, he said, he's prepared to live with it. After the year he's had, he has to be.