For Glimpse of the Future After Zuffa-Strikeforce Deal, Look to the Past 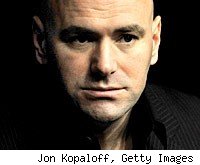 An old proverb tells us that the best predictor of future behavior is past behavior. Or maybe that was Dr. Phil. Okay, forget who said it, the point is it's usually true.

That's why, as the MMA world sets itself to reading the tea leaves of the Zuffa-Strikeforce deal in an attempt to find out what will come next, we could help ourselves a little by looking at what has come before.

UFC president Dana White told Ariel Helwani (several times, in fact) that it would be "business as usual" over at Strikeforce after the sale. The way he explained it, the two MMA brands will operate as separate entities under the same ownership.

If you're feeling like you've heard that line somewhere before, you're not alone.

Zuffa has bought major MMA competitors before, such as Pride and the WEC, and a quick glance around the landscape reminds us that neither is still alive and kicking today. The WEC had a good run as Zuffa's little brother promotion, but the fact that the UFC eventually decided to disband the organization and absorb its more promising fighters should tell us something about how seriously Zuffa is considering another extended go with a different version of the same basic experiment.

The smart money says Zuffa will keep Strikeforce alive long enough to let its contracts run out, and then it will start taking it apart piece by piece. Will that be good for the fighters, the fans, and the sport? Sure, in some ways. Probably not, in other ways.

For starters, consider the Dan Henderson situation. A decorated MMA veteran and former champion, Hendo was getting on in years when it came time to sign a new contract with the UFC. He was coming off a win and still felt like he had plenty of fight left in him, but the UFC brass didn't think he was worth anywhere near what he was asking.

So Hendo cleaned out his desk and carried his cardboard box full of championship belts over to the Strikeforce offices, where he got a lucrative deal that saw him pocket a cool quarter of a million dollars just for stepping in the cage against "Feijao" Cavalcante last weekend.

Whether you think Strikeforce overpaid for Henderson's services, or whether you think the UFC was trying to low-ball him, it doesn't matter. From the fighter's perspective, more viable options means a better negotiating position, which means more money.

Now imagine it's the not-too distant future and another former champ – for the sake of argument, let's say Rashad Evans – doesn't like the deal the UFC is offering him. Do you really think that a) there will still be a Strikeforce for him to negotiate with, or b) that the hypothetical Zuffa-owned Strikeforce would offer him a competitive contract that would only result in jacking his eventual price tag up, ensuring that whichever Zuffa-owned promotion signs him, it pays more than it otherwise would have?

To imagine such a scenario playing out would require a suspension of disbelief not seen since the last 'Fast and the Furious' movie. It's not just unlikely – it's almost complete unreasonable. And just like that, the situation that allowed Henderson to fetch a nice sum for his skills is now rendered obsolete for future fighters.

Then again, now that Zuffa has the market on big-time MMA thoroughly cornered, there will be certain benefits for fighters. If the UFC can take advantage of the opportunities now available to it through TV deals – perhaps even seizing the moment to introduce the NFL audience to the sport now that the fall schedule seems likely to be pro football-free in 2011 – it could be the breakthrough into the mainstream that MMA has been waiting for.

That means more fights, more viewers, more money coming in, and fewer barriers preventing the best fighters from eventually meeting in the cage. That's good for fans, good for fighters (at least some of them), and, ultimately, good for the sport. It's the major leagues all under one banner, with the power to promote the brand and the sport simultaneously to a massive audience.

That's all good stuff, unless you're one of the fighters who happens to have gotten on Zuffa's bad side, or one that it has deemed not worth the money. Then where do you go?

It can work the same way for fans. Though it's always a flawed analogy to compare MMA to league-based team sports (and yet who among us can resist?), take a look at what's happening with the NFL at the moment.

A problem within the singular dominant force in pro football in America results in a problem for pro football as a whole in America. The sad fans who have no excuse to eat wings all day on a fine September Sunday this year will probably have no great reason to be optimistic about the joys of consolidation in pro sports then, just as the players who risk losing one of their precious few competitive years won't be reaping the rewards of the all-powerful league when they're stuck at home.

We've already seen some of these same pros and cons in MMA. The UFC grew in scope and influence after purchasing Pride, but fans lost one outlet for their MMA interests and some fighters lost a source a revenue, while others lost a foothold in their negotiating position. The absorption of the WEC means more attention and bigger paychecks for Urijah Faber and Jose Aldo, but it meant unemployment for others and fewer live events for fans in the smaller markets where the WEC had been a more regular visitor than the UFC.

But regardless of what fans, fighters or media think about it, a major change is coming to MMA. It would be an oversimplification to label that change simply good or bad, or even good for some and bad for others. It's more complex than that, and the truth is that even the UFC can't be sure what long-term ripples this move will create.

All we know for sure now is that the MMA landscape – for all those involved in it – will never look the same after this purchase. Like it or not, change is coming. And rarely has such change been good or bad for all the people, all the time, and from all points of view.