Yoshihiro Akiyama Out of UFC 128 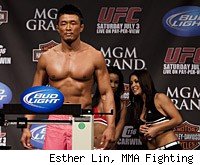 Friday's devastating earthquake in Japan has forced Yoshihiro Akiyama out of his scheduled bout at UFC 128 next week against Nate Marquardt. He will be replaced by Dan Miller.

The news was first reported by MMA Diehards, and the UFC confirmed the change quickly afterward at its official website.

UFC president Dana White initially reported on Twitter on Friday night that "Akiyama and his family are safe," and that the Japanese fighter would be Stateside for the fight. But several hours later the news had changed.

"Yoshihiro Akiyama will not be able to participate at UFC 128 due to the tragedy in Japan," White said in the UFC's official statement.

Marshall Zelaznik, the UFC's managing director of international development, said on his Twitter feed early Saturday morning that the UFC had been told Akiyama and his family were safe, but the decision had been made to pull out of the fight. Millions of Japanese residents are without power, and the state of emergency has severely hampered travel to and from the East Asian island nation.

UFC 128 takes place in Newark, N.J. Miller is a New Jersey native who fights out of the AMA Fight Club in the Newark suburb of Whippany. Miller had been booked for a bout against Nick Catone on the preliminary card, but moves up to the televised pay-per-view to face Marquardt. Miller's brother Jim also fights on UFC 128's main card. There was no announcement yet from the UFC on a potential replacement for Catone.

Miller (13-4, 1 NC, 5-3 UFC) picks up the fight on just a week's notice. He last fought at UFC 124 in December, winning a split decision against Joe Doerksen in Montreal. That win gave him two straight, including a submission win over John Salter at UFC 118 last August – a fight he also took on short notice after Phil Baroni had to pull out with an injury.

Miller went through a rough year-long stretch of three straight UFC losses, coming on the heels of and during personal struggles that included the death of his daughter and health troubles of a newborn son. But those three losses came against middleweight title challengers Chael Sonnen, Demian Maia and contender Michael Bisping, and he took all three to decisions.

"Dan Miller proves once again that he will fight anyone, anywhere, any time by agreeing to step up from the prelims to face Nate Marquardt," White said. "Marquardt has long been a Top 10-ranked middleweight, and Miller jumped at the opportunity to face him."

Marquardt (30-10-2, 9-4 UFC), the former King of Pancrase and the first challenger of Anderson Silva's middleweight title at UFC 73 in 2007, is coming off a unanimous decision loss to Yushin Okami in the main event of UFC 122 in November. That loss saw him drop to 1-2 in 2010, a TKO of Rousimar Palhares sandwiched between middleweight title contender fight losses to Sonnen and Okami.

Friday's 8.9-magnitude earthquake is one of the largest earthquakes in world history since record-keeping began, according to the United States Geological Survey. It is also thought to be the strongest earthquake to hit Japan in more than 1,200 years, according to a Bloomberg report, which put the early death toll at more than 500 – with hundreds of others already reported missing and thousands stranded. The death toll is expected to rise.

More than 100 aftershocks – at least a dozen larger than 6.0-magnitude quakes – have hit the region since the initial temblor. The earthquake triggered a tsunami with waves affecting coasts around the world, including Hawaii and the western coast of the mainland United States.

UFC 128 takes place March 19 at the Prudential Center in Newark, featuring a main-event light heavyweight title bout between champion Mauricio "Shogun" Rua and challenger Jon Jones. Jones took the fight on short notice for a title bout, accepting in the cage at UFC 126 in February after his win over undefeated fellow contender Ryan Bader. Jones is stepping in for Jackson's MMA teammate Rashad Evans, who was scheduled to challenge Rua for the belt, but had to pull out with a knee injury.