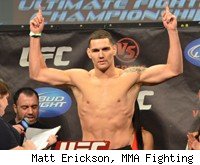 Just four fights into his pro career, Chris Weidman got the call that nearly every mixed martial arts fighter hopes for: a chance to fight in the UFC. At the time, though, Weidman happened to be hurt, still recovering from a fractured rib. The fight -- a chance to perform on the main card against veteran Alessio Sakara -- would be in just 18 days.

Needless to say, it wasn't the best of timing, particularly for a highly touted athlete who many expected to wow onlookers from the beginning. In fact, on a recent edition of The MMA Hour, Weidman told Ariel Helwani that he was "in my underwear and fat" when the call came in.

"It definitely wasn't the opportunity I imagined," he said. "I always saw myself getting enough fights that the UFC wanted to have me, I could fight on undercards and work my way up."

With a golden ticket dangling, though, turning down the fight seemed impossible. Weidman accepted the invitation, prayed for the best regarding his rib, then went out and bloodied Sakara in a unanimous decision win during last week's UFC on Versus 3 event.

The decision to fight was made jointly with his trainer, Ray Longo, who famously led Matt Serra to one of the biggest upsets in MMA history when he defeated Georges St. Pierre to become the UFC welterweight champion in April 2007.


After conferring with Weidman's doctor, Longo decided that Weidman could get by on an abbreviated camp that featured conditioning and light drill work instead of usual activities like wrestling and sparring.

"I would only do this with him," Longo said. "There's no other fighter I'd do this with. 100 percent no. That's the belief I have in him. I know what he can do."

"I just told myself if I was going to feel the rib at all, it's going to be in the fight," Weidman added. "I felt healthy, the rib didn't bother me. With the body shots I felt it, but I pushed right through it."

Weidman didn't only have to push past the strikes to his injured side, but also a difficult first round, which saw the former collegiate wrestling All-American have trouble taking down Sakara, a noted striker.

While that development gave many pause to consider that he'd eventually find himself in trouble while playing Sakara's game, Team Weidman had no such concerns.

"In the corner they were like, 'You're doing great standing with the guy," Weidman recalled. "I felt his best shots and I wasnt going anywhere. I hadn't done sparring or wrestling, so timing was way off, especially in the first round. My first two takedown attempts, I don't even know if you can call them that. I was throwing a punch and thinking of a takedown at same time. I was all over the place."

Yet at the same time, Weidman had the feeling that he could eventually get the fight where he wanted it: on the ground. He was right. After going 0-for-3 in takedowns in round one, Weidman went 5-for-5 the rest of the way, tagging Sakara with 50 ground strikes over that span and bloodying him in multiple spots.

Weidman says that watching his friend and training partner Gian Villante make his Strikeforce debut just weeks before helped calm him for his first time on the big stage. In a strange bit of timing, Villante made his Strikeforce debut on the same day Weidman got the call offering him the Sakara fight. Villante went on to lose his fight to Chad Griggs, abandoning his game plan for a standup affair that ended in a first-round TKO loss. Villante admits now that his first big-time experience got the best of him, and Weidman, who was there with him, became the beneficiary of a valuable lesson.

Now 5-0 overall and with his UFC jitters out of the way, Weidman's plan is to let his rib heal and then return at full strength.

"My last fight before this was three weeks' notice and Sakara was two weeks' notice, so I'm looking forward to a full camp and showing off what I can really do out there," he said.