Munoz vs. Maia Among Bouts Announced for UFC 131 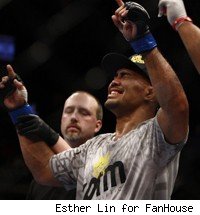 Though the UFC has not yet officially announced the event, UFC 131 is expected to take place June 11 at the Rogers Arena in Vancouver, British Columbia, Canada.

The expected main event is a heavyweight bout between former champion Brock Lesnar and Junior dos Santos, the coaches of the upcoming Season 13 of "The Ultimate Fighter," which begins airing later this month. The winner of that fight will get a shot at champion Cain Velasquez, currently on the shelf following surgery.

Munoz (10-2, 5-2 UFC) is coming off a quick first-round knockout of CB Dollaway at UFC on Versus 3 last week, giving him two straight wins and five of his last six. His only loss in that stretch was a split decision setback to Yushin Okami in August. Maia (14-2, 8-2 UFC) has also won two straight with decision wins over Kendall Grove and Mario Miranda. His last loss came last April to middleweight champion Anderson Silva, a unanimous decision for the 185-pound title.

Soszynski (25-11-1, 5-2 UFC) will look to string together back-to-back wins for the first time in two years. He won a decision against Goran Reljic at UFC 122 in November to close his 2010 at 2-1. Last February, he won by TKO over Stephan Bonnar when doctors called the fight due to a cut on Bonnar's head. The two rematched in July at UFC 116 – since the cut was from an accidental head butt – and Bonnar pounded Soszynski out. Perosh (11-6, 1-3 UFC) returned to the cage after a year layoff for knee surgery and submitted Tom Blackledge in his native Sydney at UFC 127 last month, his first UFC win.

And McGee (13-1, 2-0 UFC), the Season 11 winner of "The Ultimate Fighter," goes for his third straight UFC win after back-to-back submission wins to open his career with the promotion. He submitted Kris McCray to win TUF 11, then followed that with an arm triangle against Ryan Jensen at UFC 121 in October. Bongfeldt (21-7-1, 0-0-1 UFC) made his promotional debut at UFC 124 in December, fighting to a draw with Rafael Natal. That ended a seven-fight winning streak for the Canadian, including wins over current UFC fighters Sean Pierson and T.J. Grant.

Other fights expected for UFC 131 include Darren Elkins' debut at featherweight against Michihiro Omigawa, which the UFC announced and was previously confirmed last month by MMA Fighting; Kenny Florian's debut at featherweight vs. Diego Nunes; a bantamweight bout between Dustin Poirier and Rani Yahya; and the UFC debut of heralded heavyweight Dave Herman, who is expected to face Rob Broughton.

Heavyweights Shane Carwin and Cheick Kongo have also been rumored for bouts on the card – possibly against each other.