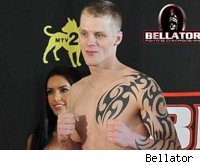 It's been a long time coming for Josh Shockley's debut with Bellator. On Friday, his past tough luck paid off.

Shockley (6-0-1), an Indiana-based lightweight scheduled for a prelim fight at Bellator 36 in Shreveport, La., on Saturday, made weight for his bout against Kalvin Hackney without issue. Then things got weird.

Ferrid Kheder, booked to face Toby Imada as part of Bellator's lightweight tournament quarterfinals, was so far off weight he didn't even bother trying, sources told MMA Fighting. And since there was just one lightweight bout on the card's prelims, Shockley was the beneficiary of some good news, for a change – a jump from the unaired prelims to a televised spot in the eight-man tournament.

Shockley told MMA Fighting on Friday that despite the short notice for Imada (28-15), who will be by far his toughest test to date, his quick-turnaround gameplan is to stay away from the ground. Imada's four Bellator wins have all been by submission, including 2009's consensus Submission of the Year for an inverted triangle against Jorge Masvidal.

"I'm hoping to keep it standing, but I'll be ready wherever it goes," Shockley said. "He's a dangerous guy, but so am I. We're both fighting somebody new."

Twice in 2009, Shockley was scheduled to make his Bellator debut, and twice he was scratched due to injuries – once his own at Bellator 14 last April, and once Mark Miller's at Bellator 25 in August. This will be Shockley's first fight since September 2009. He was scheduled to fight in the Shine Fights lightweight grand prix last fall, but was forced off that card with an injury, as well.

Kheder (18-5, 1 NC) was scheduled to fight for the first time since a controversial decision win over Hermes Franca in Costa Rica last fall – a bout that was overturned to a no contest by the promoter following allegations of fight fixing.

Aside from a TV spot, Shockley also gets a bump in pay. He was originally scheduled to make $2,500 to show and a $2,500 bonus to win against Hackney. As a tourney participant, he'll now receive $10,000 to show and $10,000 to win. Sources confirmed to MMA Fighting that Hackney, now without Shockley for an opponent, was scratched from the card – but will be paid both his show money and win bonus.

Imada has twice reached Bellator's lightweight tournament finals, and has twice lost. In 2009, he lost to current Bellator lightweight champion Eddie Alvarez by submission. Last year, he lost to Pat Curran in a close decision. Curran challenges Alvarez for the title in April.

Imada was a more than 2-to-1 favorite against Kheder, and will likely be an even bigger favorite against Shockley, who has only a quarter of the fights Kheder has. Bellator CEO Bjorn Rebney said even though Shockley may have a tough road with the new turn of events, he's still in a great position.

"We've had high hopes for Josh since we signed him," Rebney said in a statement. "This is a great opportunity for him. He really doesn't have anything to lose, and that makes him a very dangerous fighter."

Bellator 36 takes place at the Shreveport Municipal Auditorium in Shreveport, La. and will air live on MTV2 starting at 9 p.m. Eastern.