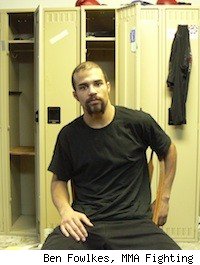 MISSOULA, Mont. – When undefeated lightweight Lloyd Woodard (10-0) heard he'd finally get a shot at the big leagues via Bellator's 155-pound tournament, he did what any self-respecting Montanan would do: he started growing a mustache.

We're not talking some Brooklyn hipster lip fuzz, either. There is nothing ironic about Woodard's facial hair, though it is intended to send a message when he shows up on MTV 2 to face Carey Vanier on Saturday night.

"I want everybody to know I'm from Montana," said the 26-year-old Woodard.

It's not simply regional pride, although, sure, there's some of that wound up in Woodard's Western-style 'stache. But there's a strategic element to this, too.

You see, when you're an unbeaten fighter coming out of a little gym no one has heard of in a state most people never think about, you get used to being written off. You live with it, and if you're smart, you embrace it. You use it as one more weapon in your arsenal.

"Basically, they liked the idea of Lloyd because of his record," said Woodard's coach, Matt Powers, who owns and operates Missoula's Dog Pound Fight Team. "They could put that 9-0 record on a poster, but being from Montana they thought he'd just beaten up a bunch of farmers. They essentially brought Lloyd out as a feeder for [Martinez] to help get him noticed by a big show, but they didn't count on Lloyd being as good as he is."

It didn't take long for the promoters to discover their error. Woodard submitted Martinez with a rear naked choke a little over four minutes into the first round. One of the big shows did come calling after that, only for Woodard instead of Martinez.

Now, with his TV debut at Bellator 36 just a day away, the process starts all over, albeit on a much bigger stage.

"I love that people think that," said Woodard. "That's why I show up with a big mustache, to let them keep thinking that. I love that people underestimate me. But definitely when you get in there, after a couple exchanges, you're going to know different." 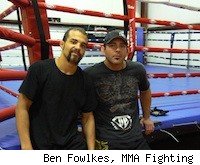 Woodard picked up MMA after graduating from Missoula's Hellgate High School, where he'd wrestled for three years. Back then, there weren't a lot of training options in this small college town, but Woodard managed to find a mentor in Powers, a local businessman who was renting out mat space for himself and a few friends in a judo club's downtown basement. Slowly, the Dog Pound Fight Team took shape there [full disclosure: I was a member of that loosely affiliated original squad], and Woodard quickly became one of the team's most enthusiastic fighters.

"I had one amateur fight and I just loved it," he said. "I couldn't get enough."

Woodard picked up a couple of amateur bouts in various regional promotions around the Pacific Northwest, but things didn't really get serious until one mistake nearly cost him his shot at a pro career.

In August of 2005 Woodard followed some friends into the apartment of a former University of Montana basketball player, where they were looking for a fight. The ensuing assault left the basketball player with a broken jaw, and while Woodard didn't throw a single punch according to police reports, he was arrested as an accessory to the crime.
I had one amateur fight and I just loved it. I couldn't get enough.
-- Lloyd Woodard
"I was charged with felony burglary," said Woodard. "It sounds like I was in there to, like, steal somebody's stuff. But definitely I'm guilty of a burglary because I went into somebody's house with a friend of mine and I was there to back him up on a fight. It was just a bad decision."

Woodard spent nearly two years incarcerated for the crime, which he said gave him plenty of time to think about what he wanted out of his life, and how easily it could slip through his fingers.

"Fighting was pretty much the only thing I could think about while I was locked up. Right when I got out I knew that I was going to get serious. You have a lot of time to think, and this is what I thought about the whole time. Now that I'm doing it, it satisfies me that I have something that I love that I can actually do as a career. When I got out, I was determined to make something of myself."

Woodard had his first pro bout in October of 2008, and then racked up six more wins throughout 2009. The more success he had, he said, the more people encouraged him to leave Missoula and take up residence at one of MMA's more notable gyms, where he might have a better chance of getting noticed.

He made a couple visits to bigger gyms, and even served as a sparring partner for UFC lightweight Jeremy Stephens in San Diego at one point, but his home was still in Missoula. When it came time to prepare for his Bellator debut, Woodard said, he knew he wanted to be in his home gym with his longtime trainer Powers helping him prepare.
I want to be in wars where people can learn who I am.
-- Lloyd Woodard
"What a lot of people don't realize is, I've been with Matt for about eight years now and I can't compare him to any other coach. He knows how I move, what I do. Like when I went down to San Diego, it's a lot different. They want you to do things their way. But Matt knows every injury I've ever had in my life. He knows exactly what's going on with me. He knows the way I think, the way I react, the way I feel inside. That's why no one's ever going to be able to coach me better, and that's why I've chosen to stay in Montana for as long as I have."

Of course, that comes with a price. The larger regional promotions in Colorado, Oregon, and Washington want to use either local fighters who can sell tickets to their friends and fans, or else they want out-of-state tomato cans who can bolster the records of the hometown boys.

For a while, Woodard got offered almost exclusively the latter type of fight, though the outcome wasn't what the promoters expected.

"His last four fights have been like that," said the 41-year-old Powers. "That's when it dawned on me what we were looking at."

The win over Martinez finally got Woodard some national attention and the chance to go from fighting in front of small, regional audiences to a nationally televised stage. And with Bellator's tournament format, the only thing stopping Woodard from becoming a household name in MMA are the other fighters standing between him and the finals – beginning with Vanier on Saturday night.

"I haven't thought about anything but winning the entire tournament," said Woodard. "It's not that I'm looking past anybody, but that's what I'm in it for. That's why I went and watched videos on the internet of everybody in the tournament, even guys who I just heard on forums and stuff that might be in the tournament."

As for Vanier – a Greg Jackson-trained fighter who lost in the semi-final round of Bellator's season two lightweight tournament before coming back to defeat UFC veteran Rich Clementi by decision at Bellator 28 in September – Woodard expects a wrestler who will try to take him down and keep him there.

But since it's Woodard's goal to introduce himself to the national audience with a performance they'll remember, he said, it's up to him to make sure that doesn't happen.

"I can't really say anything good or bad about him. I just want to go in there and put on a show, and I can only hope that he's doing the same thing and not underestimating me, because I don't want to be in a boring fight, and I also don't want to be in a fight where I knock the guy out in a couple seconds. I want to be in wars where people can learn who I am. A fight should be a struggle, just the way life is."