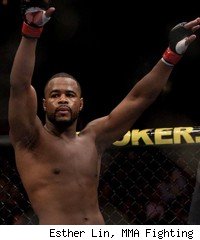 He was really hoping for the former, but from the looks of the alleged gym a stranger had just driven him to, the latter seemed more likely.

"It looked like a set-up," Evans says, looking back. "I looked at the building and was like, this sh-t cannot have a credible gym in there."

It was the kind of moment that one arrives at after making a series of decisions that seem reasonable enough in the moment, but when looked back upon as a whole start to seem profoundly dumb.

It began, as such things often do, with some guy in a bar. Evans had just graduated from Michigan State, where he was a stand-out wrestler, and had been trying to get a job as a police officer. In the meantime he was working nights as a security guard in a hospital and taking the occasional bouncing gig when special events at local bars sparked the need for a little extra muscle. Not surprisingly, during one such bar detail a fight broke out. After the troublemakers had been escorted out with a little help from Evans, one of the patrons referred to the move he had just witnessed as a rear naked choke.
It was a bad part of town, and I walked in there like, well, I'm about to get robbed.
-- Rashad Evans on his first MMA gym
"At the time, I was following the UFC and Pride," Evans says. "I was actually a big fan of 'Rampage' [Jackson] and I had followed it from the beginning, so I knew the terminology. But at the time it was still kind of underground, so I heard that and I was like, 'Hey what do you know about NHB?'"

The guy knew more than Evans, as it turned out, because he told the future UFC light heavyweight champ about a gym in nearby Lansing. When Evans expressed interest in checking it out, the man offered to pick him up and drive him to a training session there.

"I was thinking it would be this martial arts gym with all this discipline and stuff. It was this dilapidated, wore-down warehouse underneath a bridge in Lansing, Michigan, next to these nasty railroad tracks that nobody even used anymore. It was a bad part of town, and I walked in there like, well, I'm about to get robbed."

He followed his new friend up a rickety staircase, the smell getting thicker and mustier as they ascended. He could hear the unmistakable sounds of men yelling, punctuated every so often by the ringing of a bell.

"Then we got in there and the room was funky as all hell. There was blood and booger smear on the wall. It was like a nine-by-twelve-foot room, just really small, and these guys were rolling around like crazy, taking turns and rotating in on each other, just beating the hell out of each other. It was like a real life 'Fight Club.'"

Whatever it was, it was a long way from the Spartans wrestling room. There were no windows, and the poor ventilation and insulation made for uncomfortable sessions in the winter time, when the condensation from the heat on all the bodies would drench the walls and ceilings.

"It was this awful little room, but we got some good work in that room," Evans says.

After about six months of MMA training, Evans got talked into making his debut at a one-night, four-man tournament in November of 2003 for the local "Danger Zone" promotion in Angola, Indiana.

Officially, it's still listed as his amateur debut, with his first pro bout coming the following April, but as Evans can tell you now, there weren't exactly amateur ranks in Angola back in 2003. It was just that the pro bouts paid so little that you might as well have been fighting for free.

"He didn't really know what to do. I just wrestled him down, slammed him a couple of times, and he tried running out of the ring, so I grabbed him and pulled him back in and he ended up tapping. ...It was kind of weak."

Even though the first fight of the night didn't prove to be much of a challenge, Evans found himself surprisingly winded when it was all over. It wasn't until later that he realized why.
I got $200, and I was happy. That was a lot of money to me then.
-- Rashad Evans on his first paycheck
"It was this ring in the middle of this Bingo hall, and everyone was smoking cigarettes. I mean, everyone. And you're so high up all the smoke just rises into the ring. I was pretty much breathing smoke the whole time. I remember throwing punches and thinking, oh my God, I trained hard but I'm out of shape. I didn't realize I probably couldn't breathe because of all the damn smoke in there."

His second and final fight that night was supposed to be the big one. Evans was taking on George Crawford, who had been victorious in Danger Zone's previous event that September.

When it came to overall skills, Evans didn't have a lot of diversity in his game to fall back on. He'd punched and been punched enough by then to know that exchanging on the feet was dangerous for a guy without a lot of striking experience, so instead he put his wrestling skills to work against Crawford once things started getting hectic on the feet.

Evans had expected his pro debut to be a little tougher, but he didn't mind going home with two wins in one night, regardless of how he got them. He even got a meager payday for his work that night.

"I got $200, and I was happy. That was a lot of money to me then," he says. "I knew I'd keep doing it. It just felt like something very fun to do, because I was still active and still wanted to be an athlete. It was a good outlet. Afterwards, I just felt very, very peaceful. I had an outlet to get that aggression out. But I felt like I'd never, ever make enough money to make a living at this."

Evans would go on to win five straight fights the next year before being selected to compete on season two of 'The Ultimate Fighter.' There was only one problem: at 5'11" and just a little over 220 pounds, Evans wasn't much of a heavyweight.

"I ate mashed potatoes every single night, trying to get as big as I possibly could," he says. "There was no way I was going to pass that up."

Say what you will about the merits of mashed potatoes as a training diet, but Evans went on to win the finale as a heavyweight before dropping down to 205 pounds and eventually becoming the UFC light heavyweight champion. As for the fear that he'd never make enough money to live on as a fighter, well, let's just say those concerns have subsided too.