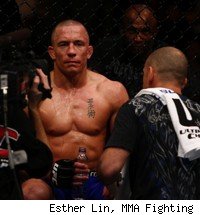 It's got to be tough being Georges St. Pierre right now. He's trying to get ready to fight a guy who's on a 15-fight winning streak, winning titles in two weight classes in three promotions along the way. And everyone is acting like the task ahead of him is so easy that he should already be thinking about his next fight.

St. Pierre just wants to put his laser-like focus on Jake Shields, whom he'll fight at UFC 129 next month. But everyone is talking about a future fight with Anderson Silva, as if Shields is just a little diversion on the way to the superfight we all really want.

That's true of MMA fans and media, but it also goes all the way to the top: UFC President Dana White has frequently mentioned that a St. Pierre-Silva fight could be next, and UFC co-owner Lorenzo Fertitta told Mike Straka that GSP vs. Silva is his dream fight. It seems that everyone wants that fight -- except St. Pierre himself.

One of the things that makes St. Pierre special as an athlete is that he demands the best of himself: St. Pierre isn't going to move up from 170 pounds to 185 pounds unless he can add 15 pounds of lean muscle to his body without losing any speed. Welterweight is the best division for St. Pierre's body, and he's not going to change weight classes without dramatically changing his body. That would take a long time.

And even if St. Pierre does beat Shields, and after he beats Shields he's willing to move up in weight, does it make sense for a Silva-GSP fight to come next? According to St. Pierre, it would take several months for him to build up his body to the point where he thinks he's in peak form at 185 pounds. That would mean Silva would be waiting around a long, long time. Does it really make sense for the best pound-for-pound fighter in the world, who's coming off one of the most spectacular knockouts in MMA history, to sit on the sidelines so he can wait to fight someone who's lukewarm about fighting him?

It's especially questionable to have Silva waiting around because there are perfectly good opponents for Silva who will be ready far sooner than St. Pierre. The UFC declared Yushin Okami the No. 1 middleweight contender four months ago. Whenever Chael Sonnen is cleared to return from his suspension, a rematch with Silva would be a huge middleweight bout. And if the UFC is looking to do a champion vs. champion superfight, Silva against the Jon Jones-Shogun Rua winner would be a spectacular option.

So maybe it's time to heed St. Pierre's advice and slow down all the talk about GSP vs. Silva. If St. Pierre doesn't want it, why should the rest of us?