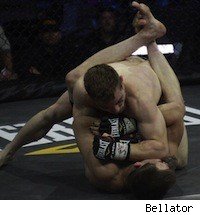 Zack Makovsky captured his first championship belt in 2010 after winning Bellator's inaugural bantamweight tournament. Makovsky's rise to glory came quietly, which is not surprising given his soft-spoken nature. Still, it was an accomplishment worthy of some bragging rights, particularly given his grinding schedule; Makovsky fought six times in eight months in 2010, winning all his fights.

With the championship, Makovsky put himself on the international MMA radar, though he hasn't been a surprise to those in the know. Among those was his Philadelphia Fight Factory teammate and fellow Bellator champ Eddie Alvarez, who told MMA Fighting that he forecasted Makovsky's success from the beginning.

"For people who don't know about Zack, you're going to find out," Alvarez said. "You don't need my words to tell you, you're going to find out very soon. The first time I met him, before I ever won a title, I said to him, 'You're going to be a world champion.' That was maybe 5-6 years ago. He just had certain qualities where you knew that he was not going to have it any other way. Some guys just have what it takes. It's not the talent, speed, strength or whatever, it's the attitude. And he had that attitude to be a world champion."

An example of that attitude is his cerebral approach to athletics. In college, Makovsky was a wrestler for Drexel University while academically, he majored biology. The latter was no accident; Makovsky took classes in human physiology, anatomy, exercise physiology, and similar topics for a very specific reason.

"Really why I got into it is that I wanted to be the best athlete I could," he told MMA Fighting. "I kind of centered my whole life around being the best athlete i could in every area. It's definitely nice to have knowledge in that area but it puts more pressure on me, too. If I get tired when I fight, I'm going to get a lot of crap from a lot of people. "

Today, it has a dual purpose for him. Not only is he a professional fighter, but he is also an assistant strength and conditioning coach for Drexel. He also tends to be the go-to guy on the subject at any gym he visits.

A career in MMA was a near-certainty for Makovsky (12-2) even while he was attending Drexel, where he won 72 matches in his career. During the wrestling season, he would focus solely on that, but in the offseason, he would train a few days a week at the the Fight Factory.

"I was always interested in it, and when I graduated, I decided to compete, liked it, and kept going," he said. "Wrestling helped me pick up grappling quickly. I started doing grappling tournaments in the offseason. Once I graduated, I had my first pro fight about six months later. It felt good, so I kept on."

That first fight came in Dec. 2006. By his fourth pro fight, he was matched up with Brazilian jiu-jitsu master Wilson Reis, who was early in his career at the time, but still a dangerous grappler. Reis tapped out Makovsky in the second round. It was a learning experience, and he's only lost once since, winning nine of his last 10 fights.

His career pace sped up dramatically though in 2010, when he won back-to-back fights in six weeks spanning from late February to early April. Then he signed with Bellator and things really got frantic. After qualifying for the Bellator tourney with a win in June, he fought three times from Sept. 2 to Oct. 14, winning each time.

"The tournament itself is pretty physically grueling," he said. "I fought three fights in six weeks. i usually have 3-4 months between fights. Thankfully, I didn't get any serious injuries, just bruises and bangs from the fight.

"I think it was harder mentally though," he continued. "After the first round of the tournament, I tried to jump right back into training and I didn't give myself enough time to recover and I got sick. so I had to pull back training more than anything else. I just focused on the details of things I wanted to work on. Focused on strategy and things like that."

The strategy worked well, as he topped Ed West in the finals to capture the belt. On April 16, he'll face undefeated Chad Robichaux (11-0) in a non-title fight at Bellator 41. But asked where his newly earned promotional title puts him in the grand scheme of things though, and Makovsky reverts to the soft-spoken type. He's a champion, but not yet a star, and though his teammate Alvarez is quick to boast about his pal, Makovsky chooses to let his resume state his case, and leave the debating to everyone else.