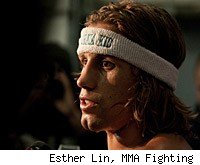 Ten days before their co-main event bout at UFC 128, bantamweights Urijah Faber and Eddie Wineland said Wednesday they only have one thing on their minds – a win, then a title shot.

Though all the pieces would appear to be in place for the winner of the fight to possibly get a coaching spot on this fall's 14th season of "The Ultimate Fighter," both Faber and Wineland, making their UFC debuts, said they can't think about that now.

"I don't know what (the UFC's) criteria is for that – they seem to change it up a lot," Faber (24-4, 9-3 WEC) said on a media conference call. "And I haven't heard anything at all. I feel like this (fight) is a shot to get a title shot, which is most important to me. The reality show thing would be great, but my focus is getting that belt."

The UFC announced earlier this month that Season 14 of the popular Spike TV reality competition will feather bantamweights and featherweights. A tryout for the show will take place on March 21 in Newark, two days after UFC 128.

The other coaching spot, if indeed the Faber-Wineland winner was given one, would go to current bantamweight champion Dominick Cruz. Cruz had hand surgery earlier this year, putting him on the shelf for a while.

Wineland (18-6-1, 5-2 WEC), the WEC's first bantamweight champion in the pre-Zuffa era, finds himself under a big spotlight for the first time in his career. Though Faber has headlined many WEC cards, just one of Wineland's last five WEC bouts before the merger with the UFC was part of a main card. Still, the full-time firefighter has put together a four-fight winning streak and back-to-back Knockout of the Night bonuses going into his fight with Faber, the former featherweight champ.

"I want what he wants, and he wants what I want, and what we both want is that belt," Wineland said. "If the TUF 14 coach position arises in the midst of it, then so be it – I'd be happy to do it. Whatever's going to come from it, I don't know. But right now, my focus is on Urijah and then that belt."

The UFC has not yet made any official comments about whom the coaches might be – likely waiting for the dust to settle with the Faber-Wineland fight, as well other title contenders in the mix like former champ Miguel Torres, who fights next at UFC 130 in May, and Joseph Benavidez, who fights on UFC 128's preliminary card.

Faber said being a coach on the show would be a double-edged sword since he wouldn't be able to fight while taping the show or while it airs. Taping for the 14th season is expected to begin this summer, with a season premiere episode happening in early fall. Traditionally, the opposing coaches fight on a pay-per-view at the conclusion of the season, which for Season 14 could be the promotion's year-end show, possibly on New Year's Eve.

"I would love to coach on the show – (but) I think that would put me out until about December," Faber said. "It would be a trade-off, of course, but it's a great marketing tool and I think it would be an awesome experience. It just kind of depends on what those guys are thinking, because I have zero say in it – other than, even if I didn't want to do it I'd be doing it anyway. But I'd love to do it. It would be awesome."