Jones, Rua Agree on One Thing: The Other Guy Should Be the Favorite 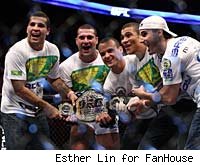 Depending on which sportsbook you consult, Jon Jones is probably somewhere in the neighborhood of a 2-1 favorite in his fight with UFC light heavyweight champion Mauricio "Shogun" Rua at UFC 128.

Whether that's due to Rua's long injury layoff or Jones' dynamic blend of skills – or, most likely, some comination of the two – it doesn't seem to matter to the two combatants. While they disagree on what the outcome of the fight will be next Saturday night, they both seem convinced that they deserve to be thought of as the underdog.

You might think that Rua, who knocked out Lyoto Machida last May to claim the 205-pound belt, would be a little annoyed to see himself listed as the underdog against a 23-year-old with less than three years experience as a professional. Not so, said Rua, who remarked that he completely understood why oddsmakers might be siding with the younger fighter.

Of course, just because each fighter considers himself the underdog doesn't mean he expects to lose. Calling the other guy the favorite is a way of taking the pressure off one's own shoulders and hoisting it on to one's opponent's.

But while Jones said he "got a little bit of a headache" the first time he sat down to study tape of Rua in preparation for the fight, he doesn't seem to have any doubts about his own abilities, regardless of whether he agrees with the betting line.

Not that he's expecting it to be walk in the park, mind you – injury layoff or not. Jones described Rua as "a legend," and said he was "excited to be pushed for the first time – if I'm pushed, who knows."

Whether that sounds like a man who thinks he deserves to be called an underdog is arguable, but one thing he's not doing, Jones said, is planning on getting an easy road to the title in Rua's first fight back after knee surgery.

"I'm not looking at Shogun as being easy despite his knee injuries and his time off. I know he's a beast. I think with fighters either you're a wolf or you're a sheep. There are a lot of UFC fighters who are sheep, but I know Shogun's a wolf. I believe that I'm a wolf as well, and that's what you guys are going to see."