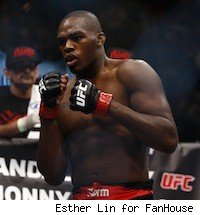 A few months ago Jon Jones and Rashad Evans would have both sworn up and down that they'd never fight each other, and that they wanted only the best for one another even as the two teammates both chased UFC light heavyweight gold.

But with Jones' title shot at UFC 128 against champion Mauricio "Shogun" Rua just around the corner, those days are now but a distant memory.

While Jones described Evans as a friend on Wednesday's UFC media call, he also insisted that won't be thinking at all about his teammate at the Jackson squad when he takes on Rua in Newark, New Jersey next Saturday night. Even if he got the title shot only after an injury knocked Evans out of the main event, Jones was in no mood to discuss the fighter he's described in previous interviews as a mentor and a big brother.

"With all due respect to you as a reporter – and I want to make it clear to all the other reporters – but I absolutely hate when people mention Rashad Evans, especially throughout this training camp," Jones said when asked about the recent change of heart both men have had with regards to meeting in the cage at some point in the future.

"He's a friend of mine, but I'm fighting Mauricio "Shogun", one of the best fighters that's been around for a long time, and for people to even be mentioning Rashad Evans right now, I think it's ludicrous," Jones continued. "Rashad is not in my mind, he's not in my being. He has absolutely zero to do with my heart and who I am right now. Right now it's me versus Jon Jones, and I'm beating all the weakness out of myself, beating all the give-up out of myself, I'm beating the lack of cardio, I'm beating the lack of confidence – any sign of weakness that's in my heart, I'm getting rid of it. The fact that people are bringing [up] Rashad, it almost angers me. This guy has nothing to do with Shogun, and I think from here on out I won't even answer a question about Rashad."

If you're noticing a change in Jones' tone when it comes to his teammate, you're not alone.

As recently as two months ago Jones told MMA Fighting that he and Evans "have to be happy for each other and we have to always be pulling for one another," adding that he would wait his turn or consider a move up in weight if Evans became the 205-pound champ.

But in an interview aired on Versus last week, Jones appeared to have changed his mind on a potential fight with Evans, remarking that if it was the fight the UFC wanted to make, "I guess that's what would have to happen." Upon hearing that, Evans said on ESPN's 'MMA Live' that since he was "no punk," he'd have no choice but to accept that offer as well.

And just like that, a never turned into a maybe.

Only now that Jones is preparing for the fight of a lifetime against Rua, he's understandably sounding a little irked by questions that take him on the same detour away from the task at hand.

Even if it was Evans' misfortune that resulted in Jones getting his moment to shine, the 23-year-old phenom doesn't sound as though he's losing much sleep over what's to become of his teammate.

"Rashad's my friend, he's my boy, but I definitely won't be thinking about Rashad at all throughout this fight," said Jones. "If anyone I'll be bringing with me, it's God. I'll be bringing God with me and the faces and images of all my training partners and my coaches. I'll draw from all of them. You know, there's a quote that says you're only as good as the people you're around, and Rashad being one of them, but I have a lot of people outside of him who I can draw energy and power from, and they'll all be with me."