Eddie Alvarez: 'Any Night, I Have the Ability to Beat Anyone in the World' 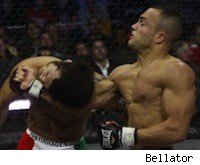 No matter which publication you favor, you don't have to look too far down the lightweight rankings before you find the name of Eddie Alvarez. With a record of 21-2, and wins in 11 of his last 12 fights, he is by far the most highly ranked fighter in any division on the Bellator roster.

The across-the-board respect for his impressive resume is a long overdue development for the 27-year-old Philadelphian, whose quest for widespread acclaim -- done completely outside the UFC machine -- has been a slow burn.

Alvarez has done it with an in-cage work ethic worthy of his city's blue-collar roots. Philly has always been a notorious fight town, home to boxing greats like Joe Frazier, Sonny Liston and Bernard Hopkins, but with no new pugilists coming to the forefront, Alvarez has essentially filled the void, watching his popularity grow over the last few years. Now, with the promotion's arrival on MTV2, Alvarez may see his profile and reputation expand even further.

Ask Alvarez about it though, and he'll tell you that he simply can't be bothered contemplating things like fame and public interest.

"In my mind, with the things going on around me, I ask myself the same question: What can I control in my life right now?" he told MMA Fighting in a recent interview. "What am I able to do as far as making improvements in my career? The answer is to continually improve my training, be diligent and work hard. All those other things will fall into place. What's in front of me right now is one practice at a time, getting better, improvement. Everything else falls into place. That's been my formula from the beginning. It wasn't to be No. 1 in the world or to remain the champion for so long. It was to fight for a living. That was my only goal. I got to that goal by staying focused on what was in front of me and improving every day."

By now, he's evolved into a very complete fighter, capable of trading strikes, going takedown-for-takedown, or going to the ground with anyone in the division. And we mean anyone.

Among the fighters with whom Alvarez regularly trains is UFC lightweight champion Frankie Edgar. Alvarez and Edgar -- who lives in Toms River, New Jersey -- are separated by just about 70 miles, and the two usually meet up once or twice a week. On Tuesdays, they often meet at Ricardo Almeida's gym in Hamilton, New Jersey, while on Saturdays, Alvarez's Philadelphia Fight Factory home base gym is the spot.

Though many MMA fans and viewers rank Edgar as the world's No. 1 lightweight, Alvarez says there is nothing more than a friendly rivalry among the two.

"We say that me & Frankie are both No. 1 in the world," Alvarez said. "There's no conflict of interest. We have different goals. Frankie wants to be No. 1 in his promotion, the UFC. I want to be No. 1 in the world outside of the UFC. No. 1 out of all the other promotions. So we have no conflicting goals. We're taking ourselves and separating ourselves from the pack. You're going to have a whole lot of 155-pounders at one level, and we're pushing each other to separate ourselves from the rest of them. As long as I'm not in UFC and going for the gold, and he's not outside of the UFC, there's no conflict of interest at all."

Ask Alvarez if the two friends would fight for the title of No. 1, though, and he smiles as the thought. It's almost like he's thinking, "We're both fighters, aren't we?"

Next up for Alvarez though, is a young fighter who doesn't find himself close to a top 10 ranking. Pat Curran won a shot at Alvarez's Bellator championship after winning the 2010 lightweight tournament. The two will face off at Bellator 39 on April 2.

Curran is a scrappy 23-year-old who earned headlines after upsetting Roger Huerta in a unanimous decision last May. But even with his 12-3 record, some question whether he's ready for a fighter of Alvarez's caliber. Alvarez is not one of the doubters. He says that he's more nervous to fight a lesser known fighter than one with worldwide renown.

"Pat poses a lot of threats," he said. "He's young, he's hungry. This is going to be the best condition he's ever been. It better be. He hasn't got the respect of the fans yet, so that fire is still burning. You've got to watch for guys like that. He's talented. He has good fighting instincts. He has the ability to become a champion. Do I think he's ready? I don't think he's ready for what we're about to get into. I don't think there's enough time for him to get ready for what's about to happen on April 2. I'm more prepared than I'm ever going to be for the opponent I'm going to go after. If anything, I train harder for guys like this who aren't well known than I do for other guys."

You can tell it's not lip service, as Alvarez continues on, explaining how obsessed he becomes with preparing to vanquish someone who's coming to steal something more valuable than just his title.

"When I think about it, the anxiety in me increases, and when that happens, I can't stand still, I can't get out of the gym," he said. "I'm up early, I'm home late. My anxiety increases because I can't have a guy that is not well known take my name, take my spot. It sounds weird. People think you don't have to be worried about this guy. No, on the contrary, you better be f------ worried for this guy because this is the guy who can completely erase you from the rankings and take your name in the blink of an eye and in one fight. That fire's there. That fear is there like it's never been against guys like this."

Alvarez does it all hoping, knowing, that something bigger awaits him. Before he had his date with Curran set, he spent time lobbying for a fight with Strikeforce lightweight champion Gilbert Melendez. It was a fight that he wanted, Melendez wanted, and Bellator CEO Bjorn Rebney wanted. But Strikeforce CEO Scott Coker was less than enthused, and it never evolved into anything more than just chatter.

Now that Bellator has a larger platform in MTV2, it seems like the idea could be revisited, and that's something that would still interest Alvarez.

"To be honest with you, I think in my heart, Gilbert wanted that fight to happen," he said. "I mess around and say, 'He knew his promoter wasn't going to let him fight me.' But the God's honest truth is Gilbert has more belief in himself than his promoter does. That's my take on it. Gilbert has all the belief in the world in himself. Does he think he can beat me? I don't know. I think he has ifs, but his promoter has more doubts or he would've made the fight a long time ago, like my promoter wanted to.

Regardless of what opponents the future holds, Alvarez will continue to work at his craft and live up to his reputation as one of the division's best finishers (he's stopped opponents in 19 of his 21 wins). Rankings are for the fans and media, he says. Fighters figure things out in a more practical, decisive manner. Alvarez is objective enough to say that he can't rank himself at No. 1 (he says that somewhere in the top four is about right), but he's also brash enough to insist that those questioning whether he can get there are a bit misguided.