Down Side to WEC's Downfall: Joseph Benavidez Gets Buried 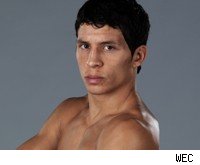 When the UFC announced that it was absorbing its little brother promotion, World Extreme Cagefighting, most mixed martial arts fans saw that as a good thing: The WEC had great fighters, and moving them into the UFC would mean increased exposure for those fighters.

It isn't working out that way for Joseph Benavidez.

Benavidez, who's recognized by most MMA observers as the second- or third-best bantamweight in the world, won't have his UFC debut shown on television. The fight between Benavidez and Ian Loveland at UFC 128 next week won't be on the pay-per-view broadcast, won't be on the Spike TV broadcast, and won't even be on the live Facebook stream prior to the broadcast. And that stinks.

Benavidez is one of the best fighters in the world (I have him in my Top 10 pound-for-pound rankings, although I admit that most people think I overrate him), and MMA fans should get to see him fight. But we won't, because on a stacked card like UFC 128, there's just not space on the TV broadcast for him. If you want to see Benavidez fight live, you'd better buy a ticket to the Prudential Center.

Back when Benavidez was fighting in the WEC, he always got on TV: Every one of his seven WEC fights was shown live on Versus. If you're a Benavidez fan, it's hard to see why you should be happy about the WEC-UFC merger.

Benavidez is trying to keep a positive attitude about it, writing on Twitter that he'd take his status on the un-aired preliminary card as motivation to finish Loveland in the first round, as quick fights with exciting finishes usually end up on the pay-per-view broadcast. For a fighter, that's the right attitude to have.

But fans who will have to cross their fingers and hope the UFC can find space on the TV broadcast for Benavidez vs. Loveland may feel some WEC nostalgia next Saturday night.