Jorge Gurgel Silences Submission Critics, but for How Long? 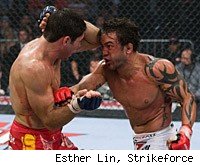 The knock on Jorge Gurgel, for years now, has been an apparent insistence on showing off his standup game – preferring to trade punches and kicks and knees with his opponents rather than taking the fight to the ground.

It's a double-edged sword. Fans sure love knockouts. Gurgel seems to know this, and wants to give the fans a show. But the buzz had grown increasingly louder the last few years that he needed to give the slugfests a break and, well, just submit someone already.

On Saturday, the Ohio resident needed just 44 seconds to finally get the submission monkey off his back when he slapped a guillotine choke on Billy Vaughan on the preliminary card of Strikeforce: Feijao vs. Henderson in Columbus. Sure, Vaughan took the fight on four days notice after Tyler Combs dropped off with an injury. But at this point, a tapout is a tapout.

It broke a streak of nearly six years without a submission victory for Gurgel. For some fighters, that might not be a big deal. Considering Gurgel is a Brazilian jiu-jitsu black belt who has been teaching the sport for the better part of the last 15 years, it had become a little more than an odd coincidence. It followed him fight after fight after fight. Gurgel has taught and coached hundreds and hundreds of students – even UFC champions like Rich Franklin – the art of jiu-jitsu. So why not put that on display in his fights?

Gurgel isn't a stranger to submissions. In his first nine career wins, he had five guillotines and three armbars. But even after the quick submission on Saturday, after one would think Gurgel would be celebrating the feeling of an opponent smacking his arm to cry "Uncle" once again, he still seemed to lament not being in a brawl.

"You guys criticize the hell out of me," he said of the media at the post-fight press conference. "I've been training Muay Thai diligently. I knew he wouldn't want to stand up with me, and when I let off the first guillotine, I tried to push him off a little bit and at least get a knee or an elbow in, and he wouldn't – he was glued to me. So I figured, might as well get some jiu-jitsu in so I can shut up the critics for a little bit.

A 44-second submission, and it seems that Gurgel would still prefer the kind of knock-down, drag-out battle that he came out on the short end of last August, a knockout loss to KJ Noons – part of a stretch that saw him lose four of five and five of seven.

It's hard to say Strikeforce putting Gurgel on the preliminary card was a message to him that he needed to start getting his hand raised – and maybe start playing to his biggest strength on the ground. But Gurgel wasn't at all happy about being on the prelims – and not even the last prelim, at that.

"I'll be honest with you – (Strikeforce treats) me great. But putting me on the undercard was a little insulting," Gurgel said. "I didn't care because everybody I fight for is from Ohio. It was over 400 tickets we sold. So it didn't matter to me today. I don't care where I fight or when I fight, but I definitely feel like I should be on the televised portion of the event, not on the prelims."

Perhaps Gurgel's submission win will get him back in a TV spot the next time he puts on the gloves for Strikeforce. Perhaps remembering what it feels like to force an opponent to tap was enough to change his fighting philosophy, and there will be a new era of Gurgel jiu-jitsu on display.

"My job is to get a name, a location and a date," Gurgel said. "I'll show up, I'll make weight and I'll do my best. I'll push myself and I'll give the fans what they want to see."

Or as long as Gurgel believes the fans want to see standup brawls, maybe they'll see another submission from him in six more years.