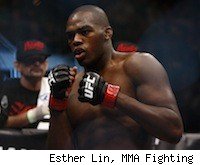 With the growing number of MMA super camps, it seems to be just a matter of time before major teammate vs. teammate matchups become more common. Until now, many fighters have resisted the prospect of facing a friend who shares the same camp. Among them was former UFC light-heavyweight champion Rashad Evans, who previously said he'd never fight Keith Jardine, and more recently, added Jon Jones to the do-not-fight list.

With Jones one win away from holding the UFC light heavyweight championship -- he'll try to wrest the belt from champ Mauricio "Shogun" Rua on March 19 -- that's a pretty big statement from Evans, but it appears it's not exactly written in stone.

Over the last few days, Evans and Jones -- both members of Team Greg Jackson -- have given interviews indicating that they might be more open to the possibility than they originally stated.

Jones got the ball rolling. In an interview broadcast on Versus during last Thursday's UFC: Sanchez vs. Kampmann event, Jones admitted that a bout with Evans was not out of the question.

"I respect [UFC president] Dana [White] a lot, and if that's what he absolutely wanted to happen, then I guess that's what would have to happen," he said. "Me and Rashad would not want to get fired over the situation."

Jones has spoken in the past about the influence Evans has had on his rapidly maturing game as well as the respect they share in noting how difficult it would be to face someone that has played a pivotal role in his growth.

"It would be majorly awkward for us," he said. "Rashad and I have a lot in common. We're both young, African-American men with families. We both like to sing and have fun. We're both elite MMA fighters. We have a lot in common and we both clicked really well. There's so many other great fighters in the world that we can compete against. And we're not animals, we're friends, we're people, we're human beings, so I'd hate to have to fight my own teammate. I would never want to."

While Jones wasn't exactly laying down the gauntlet, the public acknowledgment of the possibility seemed to catch Evans off guard.

Responding on last Friday's edition of MMA Live, Evans said his career intentions are to continue on in the UFC's light-heavyweight division, calling it his "home," and saying a move to middleweight or heavyweight would probably only be for a specific matchup rather than a permanent move.

That seems to signify that he'll stick around in the title picture, in the division that Jones might soon rule. Asked if the opportunity to fight for the belt would be the impetus for him to fight a teammate, Evans didn't deny it.

"I think so," he said. "Jones expressed [last week] in an interview that he would fight me for the title, and I'm no punk, so..."

All of that has to be music to the ears of White and matchmaker Joe Silva. As White explained on the UFC on Versus post-fight show, it's a decision that should be more about business than a personal relationship.

"How good of friends are him and Rashad Evans?" he said. "They just met a few months ago. I've known people 10 years that aren't my great friend. In this business, you can be friends with somebody and like a guy, and still fight him. Imagine if the Packers didn't want to play the Steelers in the Super Bowl because they have some friends on that team. That's not how sports works. This is a sport. These guys train to become the best, and you have to fight anybody any day."