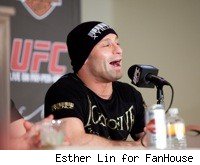 Matt Serra hasn't competed since his September loss to Chris Lytle at UFC 119, and chances are he won't be returning to action in the immediate future.

Serra's long-time coach, Ray Longo, said on Monday's episode of The MMA Hour, that with Serra's wife expecting the couple's second child in April and a lingering hand injury still bothering the former UFC welterweight champion, the 36-year-old Serra will most probably remain on the sidelines for a good portion of 2011.


"His wife is pregnant. He's got a bit of a hand issue too, so once he gets that squared away, he'll be ready to go," Longo said.

"But listen, he's a family guy; the family's coming first."

There was some speculation that Serra might consider hanging his MMA gloves up for good after losing to Lytle. The loss marked Serra's third in four fights and he had become more involved in developing his MMA schools on Long Island. But Longo guaranteed that "The Terror" still has some fight left in him.

"Definitely not done," Longo said of Serra. "One hundred percent not done. But I think his wife's due in April so I don't think ... Even with the injury, I really need to get an update on the hand, but he banged his hand up pretty bad [in training]. I think he took a shot but I don't think he has to go for an operation."