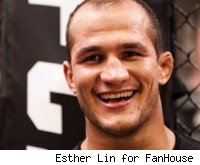 The UFC 131 fight card was scheduled to feature the conclusion of this upcoming season's The Ultimate Fighter coach showdown between Brock Lesnar and Junior Dos Santos, but that has since changed.

Lesnar was forced to pull out due to his latest battle with diverticulitis. In his place with be Shane Carwin (12-1). Dos Santos (12-1) is 6-0 in the UFC.