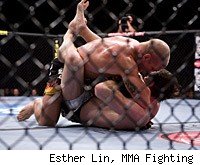 After pulling out of his main event fight against Antonio Rogerio Nogueira later this month thanks to a training injury, Tito Ortiz said he will be ready to fight again later this spring – and wants a trilogy fight with Forrest Griffin.

Ortiz, the former UFC light heavyweight champion, was scheduled to face Nogueira at the UFC's Fight Night card in Seattle on March 26. But last month, a cut suffered in an accidental sparring headbutt required 22 stitches. On Monday, he told Ariel Helwani on "The MMA Hour" losing training time for an opponent of Nogueira's caliber would be a crucial setback.

"I just got the stitches out at the end of last week, and I'm not able to wrestle for another week and a half," Ortiz said. "I can't take three weeks off and (be prepared) for Nogueira – it's impossible to do. So I had to pull out of the fight."


Stepping in to replace Ortiz in the fight, which airs live on Spike TV, is unbeaten Phil Davis. UFC Fight Night 24 is the promotion's Washington debut and takes place at the Key Arena in Seattle.

Ortiz (15-8-1, 14-8-1 UFC) last won a fight in October 2006, his third fight – and third win – against UFC Hall of Famer Ken Shamrock. Since then, he suffered a TKO to Chuck Liddell in a light heavyweight title fight at UFC 66, had a draw with Rashad Evans and has lost decisions to Lyoto Machida, Griffin and Matt Hamill.

Ortiz also spent some time embroiled with UFC president Dana White in a highly publicized feud before reconciling and returning to the promotion to fight Griffin at UFC 106 and has had several back and neck surgeries.

Ortiz told Helwani he expects to be in fighting condition within three weeks and wants to start preparing for his next fight – and hopes that fight will be against Griffin. Ortiz said comments Griffin made toward him on Twitter are the impetus for wanting a third fight with the Season 1 champion of "The Ultimate Fighter," also a former UFC light heavyweight champ.

"Hopefully in May or June," Ortiz said about a possible return. "It's up to Dana and the UFC to let the fight happen. I know people want to see me fight again, so let's do a Forrest-Ortiz 3. He's a former world champion, our last two fights have been awesome – so let's just put on a 3."
I don't know – they want to have their name associated with me? No one else is worthwhile? I don't know why people do it... Take your ticket and wait in line, and Forrest – I'll give you the No. 1 ticket.
-- Tito Ortiz on being called out
Ortiz won a split decision at UFC 59, handing Griffin his first UFC loss. At UFC 106, the judges again were split – this time giving the nod to Griffin. Though there hasn't necessarily been any major outcry from fans wanting to see a third Griffin-Ortiz fight, Ortiz believes the fight makes sense, especially given Griffin's brief Twitter trash talk.

"Maybe it's a blessing in disguise – maybe he's just looking for a (butt) whooping," Ortiz said. "Our last two fights were great fights. They were close. The last one I thought I won, but they gave it to him. So let's just make the third time better than the last two. I guess the fans will speak loudest, so let's make the fans make some noise."

Ortiz said many fighters want to face him in order to make a name for themselves, perhaps playing off his status as a former UFC champion – and as one of the most popular, and polarizing, figures in MMA history.

"Take a ticket and wait in line," Ortiz said of being called out. "I don't know – they want to have their name associated with me? No one else is worthwhile? I don't know why people do it. They want to be famous? I guess me being as infamous as I am, these guys can get on me and the only way for them to be recognized is to fight a big name like me. I think it's cool. I think it's funny. Take your ticket and wait in line, and Forrest – I'll give you the No. 1 ticket."

Whether or not the UFC books a Griffin-Ortiz trilogy fight remains to be seen. But before Ortiz had to pull out of the Nogueira fight, White said he was in a "must-win" situation – that he likely needs to win, or retire. Ortiz said after his loss to Hamill, he wasn't worried about the UFC cutting him and cautioned that despite his losing streak, he has plenty left in the tank, despite what White might think.

And high-level opponents are what Ortiz said he wants. He said he has no interest in helping smaller-name fighters climb the ladder – and would prefer to only take part in bouts against other fighters of his stature.

"Every guy that I've ever fought that never had a name, I end of giving him a name by fighting him," Ortiz said. "I'm sick of doing that. I'm sick of having guys build off my name. I'll fight guys who have already been in there with me and we have great fights against each other, or have been world champions. I deserve that respect. That's just the way it is."