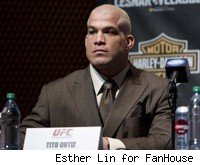 The MMA Hour finally returns on Monday with a full lineup of guests from around the MMA world.

* UFC light heavyweight Tito Ortiz will discuss the recent injury that forced him to pull out of his fight against Antonio Rogerio Nogueria and when he expects to return to action.

* Heavyweight Heath Herring will explain why he hasn't fought since August 2008 and if a return to MMA is in his plans for the future.

* UFC middleweight Chris Weidman will stop by the studio once again to look back on his Octagon debut victory against Alessio Sakara on Thursday.

* New York City subway hero Joe Lozito will talk about how MMA helped him take down a murderer and how his life has changed since the incident.

* We will also be giving away 2010 UFC Knockout packs (suggested retail price $20 per pack and $160 per box), which are currently available in hobby shops and select online retailers. It is open to legal residents of the 50 United States (including the District of Columbia). For a chance to win, just have the best call of the day. Here are the official rules of the contest.

Watch the show live below beginning at 1 PM ET / 10 AM PT. Download previous episodes of The MMA Hour on iTunes here.