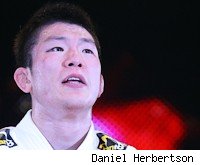 MMA-Japan was first to report the matchup and MMAFighting.com has since confirmed with Strikeforce the signing of the bout.

Aoki (26-5) is coming off an embarrassing knockout loss in a special rules match on New Year's Eve to Yuichiro Nagashima. After buying time with a variety of aerial kicks in the first round under kickboxing rules, Aoki lost four seconds into the second round in favorable MMA rules. The loss was so uncomfortable for Aoki that he briefly canceled his Twitter account to avoid the negative feedback from Japanese MMA fans. On the MMA front, Aoki won his last three fights and his last MMA loss was against Strikeforce champion Gilbert Melendez at Strikeforce in Nashville.

Beerbohm (15-1) tasted defeat for the first time in his career last month against Pat Healy at Strikeforce Challengers 14. Prior to the blemish, Beerbohm pulled off notable wins under the Strikeforce banner over Vitor "Shaolin" Ribeiro and Duane "Bang" Ludwig.