Sanchez, Kampmann Among UFC on Versus 3 Medical Suspensions 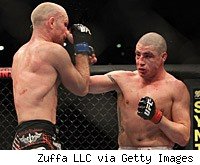 After their bloody battle in the main event of UFC on Versus 3 on Thursday, Diego Sanchez and Martin Kampmann will need medical clearance before getting back to work.

The Kentucky Boxing and Wrestling Authority confirmed with MMA Fighting on Monday that Sanchez, who won an instantly controversial unanimous decision, and Kampmann were both given indefinite medical suspensions following their fight. Sanchez needs to have his left orbital cleared by a doctor. Kampmann will need approval given on his right hand.

After the fight, Kampmann said he thought his hand was broken. But he posted on his Twitter feed on Friday that a doctor told him after the fight it was not – meaning his suspension could be lifted in short order.

In addition to Sanchez and Kampmann, three other fighters from the card, which was the UFC's debut in Kentucky, were given 60-day suspensions. CB Dollaway, Thiago Tavares and Todd Brown all received the customary 60 days due to their knockout losses. Dollaway was stopped by Mark Munoz in the co-main event; Tavares had a successful first round against Shane Roller before being dropped with a right hand and a pair of follow-ups on the ground; and Brown took plenty of round-ending punishment from Igor Pokrajac in the first and was saved by the bell, but couldn't answer for the second round.

In the main event, Sanchez appeared tentative in the first round, while Kampmann's striking was more crisp. Midway through the second round, Sanchez was already showing signs of Kampmann's jab-heavy striking attack. But with about two minutes left in the second round, Sanchez opened up a cut on Kampmann and appeared to become much more aggressive for the rest of the fight. In the third, Sanchez finally landed his first takedown attempt, which he said afterward he believed helped him with the judges – who scored it 29-28 unanimously in his favor.

Fan and analyst reaction to the decision has been heavy on both sides of the result – much like the BJ Penn-Jon Fitch fight five days earlier at UFC 127 in Australia and the Frankie Edgar-Gray Maynard lightweight title fight at UFC 125 in January, both of which were draws. Kenny Florian, who worked commentary for Versus' 3D telecast, said he scored the fight 30-27 for Kampmann. UFC president Dana White said he scored it for Sanchez. In its live coverage, MMA Fighting scored the fight 29-28 for Sanchez.