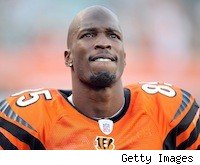 With the NFL moving towards a potential lockout, many players are busy scheming up alternative ways to make money. Times are tough in the 2011 economy, but there's got to be a better option than that of Cincinnati Bengals wide receiver Chad Johnson, who continues to suggest he'd be willing to face UFC middleweight champion Anderson Silva in the octagon.

Now, before we get too serious about the admittedly unlikely proposition, let's keep in mind that Johnson routinely name-dropping the man who is arguably the sport's pound-for-pound king isn't exactly a bad thing.

Johnson spoke about Silva again on Sunday, while in Orlando for an ESPN event.


Johnson -- formerly known as Chad Ochocinco -- has tweeted about fighting Silva at least nine times over the past year or so, including a recent tweet to UFC president Dana White, which read, "Dana tell Anderson once the CBA expires tomorrow I'm free to beat his a$$ any time any where!! Set it up."

White responded back, "If that CBA doesn't get resolved, @ochocino ur (sic) gonna have to fight anderson! I'm ready whenever u (sic) are. Let's do it!"

In a Sunday interview, Johnson was asked about what would happen if he got hurt, since he won't be covered under the NFL health insurance policy during a lockout.

"I won't [get hurt], because I'm not going to go to the ground," Johnson said. "I know if I fight Anderson, I have to fight him standing up. I'm quicker than him. I know he's very good at what he does, but don't be fooled. I'm one of the elite athletes in the NFL. I'm very fast, very quick. I just can't go to the ground. And I can't be within his reach, either. So maybe I'll just run around the ring the whole damn time."

With his last words, Johnson finally broke character with a laugh. But when asked if he would actually consider that fight if offered, Johnson left the door open, showing that maybe he's half-serious about the wild proposition.

The 32-year-old Johnson has reportedly trained boxing for a few years, but makes big money as a big play receiver for the Bengals. The six-time Pro Bowl selection is in the top 10 among active players for career receptions, receiving yards and receiving touchdowns. He is scheduled to make $6 million in salary for the 2011 season.

Silva is coming off a first-round knockout of Vitor Belfort at UFC 126 in February. He is expected to next face Georges St. Pierre in a superfight if GSP can get past Jake Shields in April.