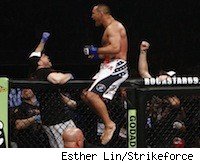 They are two of the greatest fighters of all time, and they fight under the same promotional banner, yet we rarely hear the names of Dan Henderson and Fedor Emelianenko paired together for a potential superfight. Well, I'm here to start the push. Henderson vs. Emelianenko is a fight Strikeforce should seriously consider as the next one for the legends of the sport.

On Saturday night, Henderson won yet another piece of hardware to add to an already impressive collection. After knocking out Rafael "Feijao" Cavalcante, the 40-year-old now boasts the promotion's light-heavyweight championship. Aside from that, he's held PRIDE 183- and 205-pound titles, the PRIDE 2005 welterweight Grand Prix crown, the RINGS King of Kings tournament championship back in 1999, the UFC middleweight tournament championship in 1998, and of course, he was a two-time U.S. wrestling Olympian.

He's won both tournament and championship titles in three different decades, a testament to the longevity of one of the most decorated American fighters of all time, who has amazingly been considered among the pound-for-pound best in the sport for over a decade, ever since beating heavyweights Antonio Rodrigo Nogueira and Renato Sobral in one night to capture the RINGS tourney.

Through the years, Henderson has continued his laissez faire approach to weight divisions, fighting wherever it made the most sense rather than sticking to one place. As he explained after beating Cavalcante last night, he's never been especially worried about facing bigger guys.

"Throughout most of my wrestling career as an amateur wrestler and in my MMA career I've always had the belief that it's mostly about positioning and technique and that saves a lot of strength and energy," he said. "If you're in the right position, you don't need quite as much strength. I think that kind of was the case tonight. I'm not saying I'm weak but I don't feel weak against big and strong guys because of that reason. Mentally, I've never felt weak or outmatched at any weight class. That plays a big part of it, knowing that I'm big on the inside."

It would make sense then to let him fight as big a man as he can handle, and there is no doubt he would be interested in moving up for a non-title, heavyweight fight with Emelianenko. How do I know that? Last year, after he signed with Strikeforce, I asked him who he thought about fighting tin the promotion. At first, he gave the standard answer of wanting to fight the best opponents possible, but after a little prodding for a more specific answer, guess who's name he shot out first?

"I would love to have that chance to fight Fedor," he said then. "I think that would be the ultimate challenge, and that's what excites me."

Of course, things have changed a little bit for Emelianenko since then. At the time, he was still in the midst of his amazing 29-fight unbeaten stretch. Now, after losing to Antonio Silva via doctor's stoppage in February, he's the loser of two straight. But that doesn't change the fact that Emelianenko is still a historical great, a big draw and a contemporary of Henderson's.

Though Emelianenko has spent his entire career as a heavyweight, he's not drastically bigger than Henderson. Emelianenko is actually an inch shorter than the American, and he usually weighs in around 230 pounds, about 25 pounds heavier than Hendo. Roughly speaking, Emelianenko is about the same size as Henderson's opponent last night, Cavalcante, who walks around at about 225 pounds.

The historical significance of a Henderson-Emelianenko bout is an easy sell for Strikeforce. These are two legends, one a multi-time, multi-division champion, the other the greatest heavyweight of all time. Such a matchup should draw big money to the box office and big interest from the fans, as the pair are probably the most recognizable names on the Strikeforce roster. Put the two together and Strikeforce has its first legit, mainstream superfight.

Emelianenko vs. Henderson is a fight we know that at least Henderson would take, and after losing in the Heavyweight Grand Prix, Emelianenko is in a bit of limbo right now as well. Strikeforce CEO Scott Coker admitted after that loss that Emelianenko could be re-inserted into the field as an alternate if need be, but instead of leaving him waiting, why not match him up against the organization's other biggest name?

Also helping the cause is the muddled light-heavyweight title picture. Most of Strikeforce's best 205ers lost their last fight in the division, including Muhammed Lawal, Renato Sobral and Gegard Mousasi, and now of course, Cavalcante. Let someone come to the forefront while Hendo takes a non-title superfight, then let him come back to defend the belt.

There are going to be people who hate the idea of Emelianenko-Henderson. In their minds, Emelianenko fought sub-par competition for a while, and now they're going to argue that fighting someone a division below him is another way of attempting to book fights to his advantage. Those complaints should be ignored. The purist fan knows that Emelianenko-Henderson is a fight for history, and the casual fan knows it will be one hell of a great scrap. Either of those reasons is reason enough to make it happen.