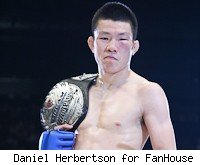 Three months into the year and still, not one major event has been planned for Japan yet. Not surprisingly, Japanese fighters and staff are growing restless.

In this edition of Nippon Weekly: former Pride FC Vice President Hirouki Kato and Pride FC President Nobuyuki Sakakibara have opened up an office and started work on the "Japan Cup," DREAM fighters and staff head to Strikeforce and kickboxing, and FEG's troubles continue as they have K-1 branding issues in South Korea.

Kato and Sakakibara Open Up Shop. Japan Cup - Bantamweight GP?
The new promotion spearheaded by former Pride FC president Nobuyuki Sakakibara and former Pride FC vice president Hiroyuki Kato is gaining momentum as the pair have moved into an office in Shibuya, Tokyo and have started to flesh out the details of their Spring event.

It has been decided that Kato will be the face of the promotion while Sakakibara will be working behind the scenes due to Sakakibara's past legal issues and the plan at this stage is to have the event at either JCB Hall or Yoyogi No. 2 Gymnasium.

The event will be called something along the lines of "Japan Cup - Bantamweight GP" and will include several fighters that fought under the DREAM banner and obviously a bantamweight tournament. DREAM champions Shinya Aoki and Hiroyuki Takaya and top lightweight Tatsuya Kawajiri were being targeted, but have since been lost to Strikeforce. The loss of Aoki is quite surprising as Kato has personally been paying Aoki for his fights in DREAM.

The event will not be a major production or a replacement for DREAM or Pride FC, but will be around the size of Shooto's Vale Tudo Japan. DREAM was planning on holding a bantamweight GP in 2011, but it now seems unlikely.

Aoki was has turned down a third meeting with former K-1 Heroes great Gesias "JZ" Cavalcante, but has been offered former Strikeforce champion Josh Thomson and there are also whispers that DREAM featherweight champion Hiroyuki Takaya is also a possible opponent. There are no other known possible opponents for Takaya at this stage but he will be making a move up in weight as there is no active featherweight division in Strikeforce.

Japanese fighters aren't the only ones looking to the West for work as DREAM staff will also be on hand on Apr. 9 to assist in event production.

As expected, Beijing Olympic judo gold medalist Satoshi Ishii will also be heading stateside for his North American and light heavyweight debut when he faces Scott Lighty on the Apr. 1 Strikeforce Challengers card.

The struggling Japanese fight promoter is currently locked in a legal battle with South Korean manufacturing company K Licensing over the use of the K-1 trademark in South Korea.

K Licensing first applied for the K-1 trademark in 2005 and it was approved in May 2007. K Licensing has since legally manufactured over 1000 non-fight related items under the K-1 brand but has recently started to produce sports products which the South Korean patent office has deemed confusing to consumers.

FEG and K Licensing clashed when the South Korean manufacturer initially applied for the K-1 trademark but the two companies settled out of court. The South Korean patent office have identified around 10 items as confusing to consumers and so now FEG is suing and attempting to get K Licensing to stop the production of all products under the K-1 brand.

K Licensing claim that their K-1 brand simply stands for Korea-1 and was never meant to be deliberately misleading. The final judgement on the case will be made by the end of March.

On the topic of FEG, Sadaharu Tanikawa has announced that he will be holding a press conference in the coming weeks where the FEG President will most likely be revealing details of FEG's restructuring and a possible new name for the K-1 and DREAM promoter. "Fight Book" appears to be a leading contender in the naming stakes but it is not yet clear as to whether it will be a new parent company entirely or simply a name change.

Due to the dire financial situation that FEG are currently in, it would not be at all surprising if FEG was dissolved to avoid debt and a new company was formed.