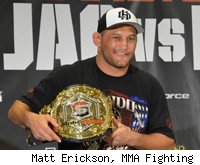 COLUMBUS, Ohio – Dan Henderson has had his fair share of legendary fight moments, many befitting his old "Hollywood" nickname. On Saturday, he notched what may become the most "Hollywood" of them all, capturing Strikeforce's light heavyweight title as a 40-year-old challenger.

Henderson landed a heavy right hand – a right hand he has become famous for – early in the third round against champion Rafael "Feijao" Cavalcante. The challenger pounced immediately, and from Feijao's back landed a barrage of back-and-forth rights and lefts to the champion's head until the fight was stopped, giving Strikeforce yet another new 205-pound champion.


"Beating a tough opponent like that was the most important thing," Henderson said after the fight at Nationwide Arena in Columbus, Ohio, new gold hardware in tow. "And this was just the cherry on top – but I do like cherries. It's been a while since I won a belt, and this one feels like it's the most important to me right now because I wanted to prove that I could still compete with the top guys."

Henderson struck first in the first round, sending Feijao back with a right hand. He moved in, but couldn't take advantage. And soon after, Feijao, a Black House fighter who trains with Brazilian champions Anderson Silva and Jose Aldo, as well as the Nogueira brothers, landed a strike of his own that put Henderson on the mat.

But the Olympic wrestler quickly scrambled out of danger to recover, grinding out the round from the safety of top position on the ground. Henderson said Feijao's right hurt him, perhaps a reminder that he prepared for a five-round title fight, not for a knockout.

"I didn't want to stand there and trade toe-to-toe with him that much the first round," Henderson said. "He hits hard. I wasn't afraid to be there, but you definitely see he's pretty powerful. I wanted to make sure I got him and won every round along the way. I felt like I was accomplishing that goal, and I was just going to be patient with him."

Henderson was arguably the most high-profile signing in Strikeforce's history when he joined the promotion in late 2009 following a five-fight stint in the UFC. His debut was a middleweight title fight against Jake Shields, and after a dominant first round he was controlled by Shields en route to a unanimous decision loss. That setback had plenty of critics wondering if he Father Time had caught up with him.


But after knocking out Renato "Babalu" Sobral at Strikeforce's December show in St. Louis, and Saturday's championship win over Feijao, Henderson believes that loss – his only one the last three years – is behind him. He also believes he might be in a position to win not despite his age, but because of it – and his experience

"I think throughout most of my wrestling careers, both amateur and MMA, I've always had the belief it was mostly about position and technique, and that saves a lot of strength and energy," Henderson said. "I don't feel weak against real big and strong guys. Mentally, I've never felt weak or outmatched in any weight class."

Henderson will now await his first defense of the belt. The last four Strikeforce light heavyweight champions – Sobral, Gegard Mousasi, Muhammed "King Mo" Lawal and Feijao – have all lost the title in their first defense.

Carmouche replaced original challenger Miesha Tate with less than two weeks notice, and after losing the first round on points, Carmouche dominated the champion throughout rounds 2 and 3. In the fight, Carmouche outstruck Coenen 238-42 according to FightMetric's scoring totals.

But in the fourth, Coenen was able to lock in a triangle choke – and though Carmouche tried to punch her way out of it, she was forced to tap, giving Coenen the type of come-from-behind title retention that is likely to be mentioned alongside Silva's win over Chael Sonnen in their UFC middleweight title fight in August.

"I believe if you're champion, you've got to fight anyone at any time," Coenen said. "We prepared for Miesha, so we had to tweak the game a little. You're a fighter, and you can't come up with excuses if you're a true fighter. It was a really good referee (to not stop the fight in the second and third rounds). When I was fighting Cyborg, (the referee) made it stop too early. I feel confident on the ground and I can take a beating."

Also on the main card, against renowned kickboxer Melvin Manhoef, Tim Kennedy took a couple kicks early he wanted nothing to do with. So he shot, took Manhoef down, took his back and forced him to tap with a rear naked choke. Though Manhoef said leading into the fight he had been slowly working on his ground game, Kennedy said he knew his key to victory was staying away from Manhoef's standup game and taking advantage on the ground.

"We're talking about Melvin Manhoef, one of the most decorated strikers in all of MMA," Kennedy said after the fight. "There was no hidden gameplan – he's weak off his back."

After the fight, Kennedy said if Strikeforce's matchmakers don't want to put him back in with middleweight champion Jacare Souza, he'd gladly take on Robbie Lawler, who lost to Souza in January.

To open the televised card on Showtime, Jorge Masvidal won a 30-27 unanimous decision sweep of Billy Evangelista, handing the Brazilian the first loss of his professional career. It was a mostly standup fight, with neither fighter ever seeming to gain an overwhelming advantage, and the crowd responded to a perceived lack of much activity as the two spent much of the fight circling and jabbing.

On the preliminary card, Ohio resident Jorge Gurgel, a renowned Brazilian jiu-jitsu black belt who has drawn criticism over the years for passing on the ground game in favor of trading strikes, got his first submission win in more than six years. He needed just 44 seconds to submit Billy Vaughan with a guillotine. Vaughan took the fight on just four days notice. And Roger Bowling beat Cesar Gracie fighter Josh Thornburg by unanimous decision, dominating on the feet and on the ground for a 30-27 sweep.