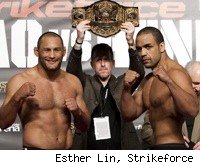 COLUMBUS, Ohio – This is the live blog for the untelevised preliminary card of Strikeforce: Feijao vs. Henderson, which takes place tonight at the Nationwide Arena in Columbus, Ohio.

The main card of the event, Strikeforce's first in Ohio, features two title fights and will be broadcast live on Showtime at 10 p.m. Eastern. The preliminary card features six fights – with 11 of the 12 fighters hailing from Ohio.

Highlights on the preliminary card include Roger Bowling, who had a pair of entertaining fights against Bobby Voelkler last year, vs. Josh Thornburg, a Cesar Gracie fighter who will have Strikeforce welterweight champion Nick Diaz in his corner; Jorge Gurgel, who looks to snap a two-fight skid against Billy Vaughan, who took the fight on four days' notice; and heavyweight Jason Riley, whose Strikeforce debut last year was a quick submission loss to unbeaten rising star Daniel Cormier. The main event is a light heavyweight title fight between champion Rafael "Feijao" Cavalcante, making his first defense since winning the belt against Muhammed "King Mo" Lawal in August, and former Pride champion Dan Henderson. The co-main event is a women's welterweight title fight between champion Marloes Coenen, also making her first defense, and short-notice challenger Liz Carmouche, who replaced original opponent Miesha Tate.

The live blog of the six preliminary card fights is below.

JP Felty vs. John Kuhner
Round 1: We start off with a couple Ohioans. Lots of these Ohio matchups on the prelims. Felty clinches early and lands a soft takedown and starts working against the cage. Back on the feet, Kuhner lands a nice left that makes Felty think for a minute, and soon after they're back on the ground briefly. Back up for more clinch work, they trade looping hooks, and Kuhner just misses a big shot. Soon after, though, Felty takes him back down. Kuhner is winning the striking battle, but he's been taken down three times now. Felty lands some decent shots on the ground – nothing of major consequence, though. MMA Fighting gives the first to Felty 10-9.

Round 2: Kuhner works a couple leg kicks to open, but Felty again gets the fight to the floor by pulling guard and going for a triangle. It doesn't work out for him, though, and Kuhner takes his back. He's got a rear naked choke on, but somehow Felty survives it to eat some big shots to the head. Kuhner has full back mount, and all Felty can do is decide whether he wants to eat punches from his back, from the side or get choked. Kuhner is eating plenty of punches, barely covering up. He's in a bad spot. He gives his neck again, but Kuhner can't lock in a finisher and decides to punch him some more. He settles into a very high mount and starts to pound. He gets his legs clinched around Felty's neck in a triangle, then rolls it over. It's tight. Felty appears to be going in and out. The ref is waiting for a tap that isn't coming. Finally he sees that he's out and the doctor hurries into help Felty wake up. The prelim ring announcer calls it a "knockout by triangle choke."

Marc Cofer vs. Mitch Whitesel
Round 1: Cofer opens with an inside leg kick, then stalks. He clinches against the fence, and they take turns trading positions. Finally, Whitesel is able to break off and they go back to the middle, where they trade kicks. After more clinchwork against the fence, Whitesel gets a soft takedown. On the ground, he tries to work some knees and looks for a sitting guillotine. He postures up to tighten it from his feet with Cofer pressed against the cage with nowhere to go, and Cofer has to tap.

Brian Rogers vs. Ian Rammel
Round 1: Quick start from Rogers with a nice punch. Thirty seconds in, he lands a nice uppercut. Then some big shots and a knee against the fence. That has Rammel backing way out and shooting for a takedown, then falling back into guard, beggin for the fight to go to the ground. Rogers has none of it, and lets Rammel stand – where he eats another punch. Rogers has already caught a couple of Rammel's kicks, and then catches another one and counters with a big right that drops him. Rammel smiles, and Rogers lets him back up. Rammel dances around, looking to avoid more of these heavy hands from Rogers. But he can't, and eats some more. Rogers nearly lands a front kick that would've been deadly. Soon, though, he is dropping down more big shots, drops Rammel, then starts with big hammer fists. For some reason, the ref isn't stopping the thing, and Rogers does what he has to do until he gets the stoppage. Rammel was done long before the extra 15 or 20 punches he ate on the ground, though.

Jason Riley vs. Jason Freeman
Round 1: Freeman looks for kicks early, and Riley mostly swats them away. Freeman's giving up at least 30 pounds in this heavyweight tilt. Freeman looks for another kick, but Riley drops him with a massive right. He follows it to the ground and lands some big hammer fists as Freeman covers up. It looks like the ref probably ought to stop it, but he doesn't. Back on the feet, Freeman looks wobbly. He throws a quick left to create some distance, and then out of the blue, he drops Riley with a left hand. He gets in quickly to start delivering ground and pound as Riley covers up, and the ref stops it. Maybe two more punches from being finished 30 seconds earlier, Freeman gets a big comeback win.

Jorge Gurgel vs. Billy Vaughan
Round 1: Vaughan kicks early, Gurgel catches it, scrambles with him on the feet, sinks in a guillotine ... and finally, after more than six years without one, Gurgel, a BJJ black belt, has a submission victory. Vaughan took the fight on four days notice. Gurgel after the fight: "I'm a professional, my job is to show up, make weight and I did that. I wasn't upset that I was put on the preliminary card because everybody I fight for – all my students – are in this arena."

Roger Bowling vs. Josh Thornburg
Round 1: Bowling comes forward quickly and gets a takedown, but Thornburg pops right back up and latches onto a guillotine. But Bowling slams him and starts to work some gorund and pound on the bottom. Eventually, Thornburg gets back to his feet and eats a bunch of big bombs from Bowling and survives them. The two clinch about halfway through the round, then trade positions and knees along the fence. Bowling breaks and lands a couple more big shots that are flush, but Thornburg stands in. And more big shots from Bowling has the crowd yelling, no doubt wondering how much more Thornburg can take. His chin is evident – much like Nick Diaz, one of his main training partners, who is in his corner. Bowling shoots for another takedown and gets it, then begins working from side control. Thornburg gets back to full guard as Bowling tries to pass. He does, gets mount, then takes Thornburg's back for a moment and looks for a rear naked choke. But Thornburg scrambles out of it and will survive the round. MMA Fighting will score it 10-9 for Bowling.

Round 2: A clinch to open the second round, and another Bowling takedown. He works out of half-guard, landing short shots. Dan Miragliotta takes a close look constantly to make sure Bowling is doing enough work from the top. He continues to try to pass, but Thornburg is able to keep it back and forth between full and half guard. Finally, with 90 seconds left in the round, Miragliotta stands them up. They tie up in the middle and Thornburg lands a nice body shot and a left to the head. Bowling answers with a pair of nice kicks. After a quick clinch, Thornburg gets a takedown. But Bowling rolls it right over and Thornburg is back in guard to close the round. MMA Fighting scores another easy 10-9 round for Bowling.

Round 3: Trade strikes to open the third round. Bowling just misses with a combo, then eats a follow-up from Thornburg. Thornburg gets a trip takedown, but Bowling once again easily rolls back out of it and has side control. He looks to get to full mount, but Thornburg gets back into guard. Thornburg tries to push his way out and wants to wall walk. The crowd grows a little restless as Bowling is content to just grind it out on the ground. But Big Dan stands them up with a minute to go. THornburg will have to look for the home run here. But Bowling lands a couple kicks and gets a big, big slam. But he slams right into a guillotine. Thornburg might have the miracle he needed. It looks tight, but Bowling just has to ride it out. He does, and he'll get the third 10-9 on the MMA Fighting card, and the fight 30-27.