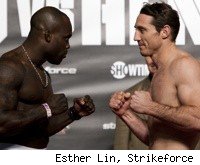 COLUMBUS, Ohio – This is the Strikeforce: Feijao vs. Henderson live blog for Tim Kennedy vs. Melvin Manhoef, a middleweight bout on the main card at the Nationwide Arena in Columbus, Ohio.

Kennedy (12-3, 3-1 Strikeforce), a U.S. Army Bronze Star winner, was expected to face Jason "Mayhem" Miller on this card. When that fight didn't materialize, Strikeforce announced a bout between Kennedy and Luke Rockhold. When that fight didn't happen, Manhoef stepped in on about one month's notice. Kennedy fights for the first time since a unanimous decision loss to Ronaldo "Jacare" Souza for the Strikeforce middleweight title, which had been vacated by Jake Shields' departure for the UFC.

Manhoef (24-8-1, 0-1 Strikeforce), a world-champion kickboxer, has lost three of his last four MMA fights and four of his last six. He lost his Strikeforce debut against Robbie Lawler in January 2010 when, after dominating through the first round, Lawler dropped him with a Knockout of the Year-worthy overhand right. He followed that up with a submission loss to Tatsuya Mizuno at Dream 15 in July.

Round 1: Manhoef throws a left kick that Kennedy catches with his hand, and 20 seconds in Kennedy shoots for a takedown. Manhoef pushes off the cage, though, is warned to not hold it, and scrambles out. Kennedy throws a front kick that Manhoef blocks, and they both duck under big shots. Kennedy throws a right kick and Manhoef catches it and pushes him away. A right outside leg kick from Manhoef has Kennedy on his knees, and back on the feet Manhoef follows with another. Kennedy shoots for a takedown, wanting nothing to do with those kicks on the feet, and after a tie-up on the fence he gets it and lands in side control. He transitions to mount, then takes Manhoef's back, looking for a rear naked choke. Manhoef said he has been working his jiu-jitsu, but it's not showing yet. After a few strikes to the side of the head by Kennedy, he gets the choke in a little deeper. It appears Manhoef won't be able to worm his way out of it, though he's trying, and he slowly taps.