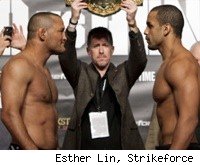 COLUMBUS, Ohio – This is the Strikeforce: Feijao vs. Henderson live blog for Rafael "Feijao" Cavalcante vs. Dan Henderson, the light heavyweight championship main event at the Nationwide Arena in Columbus, Ohio.

Feijao (10-2, 3-1 Strikeforce), defends his 205-pound title for the first time since upsetting Muhammed "King Mo" Lawal at Strikeforce: Houston last August with a third-round TKO, handing Lawal his first career loss. Feijao owns all 10 of his wins by stoppage – nine knockouts, one submission – and has never gone to a decision.

Henderson (26-8, 1-1 Strikeforce), a two-time Olympian and former two-division Pride champion, is coming off a knockout of Renato "Babalu" Sobral in December. Prior to that, he lost his Strikeforce debut to Jake Shields, challenging for his middleweight title and losing by decision after a dominant first round. Henderson left the UFC for Strikeforce, after three straight wins, when his contract expired.

Round 1: Pretty clear from Jimmy Lennon Jr.'s introductions that Henderson is the favorite of the fans. He's also about a -150 favorite despite being the challenger. Dan Miragliotta has officiating duties and he gets us started. They circle to open, and a "Hendo!" chant goes up quickly. Feijao opens first, though, with an outside leg kick that snaps. Left jab from Feijao, as he backs up while Henderson stalks. Henderson lands a big right, but can't quite capitalize. And in response Feijao lands a massive strike of his own, knocking Henderson to the mat. While Feijao rushes in, Henderson kicks to defend and manages to scramble to a takedown on top in Feijao's guard. After a it on the ground, Miragliotta warns them to work or he'll stand them up. With 2 minutes to go, he stands them. Henderson again stalks, throws a right, and checks a Feijao kick. They clinch on the fence. Henderson lands a right to the body. Feijao is warned for grabbing Henderson's shorts. With 15 seconds left, they are broken up again and the round closes without anything. Henderson gets the first round on the MMA Fighting card thanks to the takedown, 10-9.

Round 2: Left-right from Henderson has him stalking and looking for a finish. Feijao scrambles to defend, trying to take the fight to the ground to avoid Henderson's standup. But Henderson ties them up on the fence. Miragliotta warns them to work, and Henderson looks for a single-leg. He can't get it and once again they clinch. Feijao looks for a trip takedown, but Henderson out-muscles him and is on top in half guard. A quick scramble, though, sees Henderson falling back into guard on his back and Feijao looking to work shots to the body from the top. WIthout much action, they get stood up with 1:45 left in the round. Feijao misses a high kick, and Henderson ducks away from a 1-2. Henderson snaps off a cracking leg kick, then ties Feijao up and bullies his way to a takedown, settline into half guard with 30 seconds left. That's where they'll end the second. MMA Fighting gives the round to Henderson, 10-9.

Round 3: Outside leg kick by Feijao, and Henderson answers with a couple crisp strikes near the fence. Feijao pushes out and sends it back to the middle. But Henderson floors him with a right. Feijao winds up face down on the mat, and Henderson is on him immediatley, smelling a finish. He begins landing big shots on the ground and it's enough for Miragliotta to get in and stop it. Henderson is the new Strikeforce light heavyweight champion.