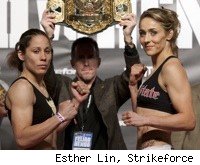 COLUMBUS, Ohio – This is the Strikeforce: Feijao vs. Henderson live blog for Marloes Coenen vs. Liz Carmouche, the women's welterweight championship co-main event at the Nationwide Arena in Columbus, Ohio.

Coenen (18-4, 2-1 Strikeforce) defends her women's welterweight title for the first time since submitting Sarah Kaufman at Strikeforce: San Jose in October. Prior to that, she challenged Cristiane "Cyborg" Santos for the Strikeforce women's middleweight title, but lost by TKO. Carmouche (5-0, 2-0 Strikeforce) takes the fight on less than two weeks notice after original challenger Miesha Tate pulled out wiht an injury. Carmouche beat Jan Finney by TKO at Strikeforce Challengers 12 in November.

Round 1: Coenen opens with a leg kick. Carmouche answers with one of her own. Carmouche eats a shot from Coenen after throwing a pair of leg kicks. Then eats anohter as she comes forward. Right-left from Coenen after a Carmouche kick. Coenen just misses a high left kick. Big looping right from Coenen just misses. Halfway through, they mix up and Coenene has her back against the wall, then reverse position briefly. They trade positions in the clinch several times, with Coenen looking for knees. Carmouche tries the foot stomp. With a minute left, the ref breaks them apart. Teep kick from Carmouche creates distance for a minute, but Coenen comes right back in. Big front kick right to Carmouche's midsection looks brutal. MMA Fighting gives the first round to Coenen, 10-9.

Round 2: Each fighter trades rights, but Coenen's looks more powerful. Carmouche is hanging in nicely with the champ, though, and pushes forward and forces a clinch against the fence. Carmouche again comes with a foot stomp, and Coenen answers with a knee. Pretty quickly, she gets a standing guillotine and it looks pretty tight. But as the fight hits the ground, Carmouche slides out of it. Carmouche, from the top, actually lands a few nice strikes as she postures up, and she passes guard nicely to north-south. Coenen looks to be cut under her right eye, and Carmouche throws knees at her shoulder. Coenen tries to roll out, but Carmouche escapes. Coenen looks for a leg lock, but Carmouche gets on top and gets to full mount and starts landing punches. Coenen is in trouble, and continues to look for a way out. She can't find one, and Carmouche brings lots of strikes trying to get the stoppage. But Coenen continues to defend herself and survives the round. MMA Fighting gives a pretty dominant Round 2 to Carmouche, 10-9.

Round 3: Carmouche shoots in and forces an early clinch with Coenen's back against the fence. They trade position, working their way along the fence – Coenen looking for knees. Carmouche powers her way to a takedown, as Coenen grabs the cage briefly and is warned. Carmouche quickly moves to full mount again, and has more than 2 minutes to work from there. She's landing decent shots as Coenen covers up, but Coenen lands a a right from the bottom. Coenen keeps bringing her legs up looking for a triangle – anything to get out of this bad spot. Carmouche gets a very high mount with Coenen pushed against the fence. Again, Coenen survives the round, but again she gets beat up quite a bit. MMA Fighting gives Round 3 to Carmouche, the challenger, 10-9.

Round 4: Coenen probably in worry mode now, and she bullies her way to a takedown. She stands up, and Carmouche pushes her way out and goes for a takedown of her own. Coenen winds up on the bottom and is looking to grab an arm, then pulls her legs up looking for a triangle. She gets it, and though Carmouche tries to punch her way out of it, it's too tight. She has to tap. Coenen survives two punishing rounds to retain her title.