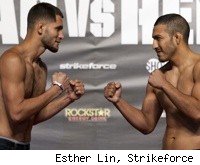 COLUMBUS, Ohio – This is the Strikeforce: Feijao vs. Henderson live blog for Billy Evangelista vs. Jorge Masvidal, the main card opening bout at the Nationwide Arena in Columbus, Ohio.

Evangelista (11-0, 1 NC, 7-0, 1 NC Strikeforce) will try to keep his unbeaten record intact against perhaps his toughest opponent yet. Masvidal (20-6) returns to Strikeforce for the first time in three years following a decision loss to Paul Daley in a Shark Fights bout in September.

Round 1: We dance around to start, then the two trade strikes and do a little more dancing. Masvidal lands a short right, though, after 80 seconds and gets a quick takedown. They trade position against the fence. Evangelista works some knees along the wall, then tries for a takedown that isn't there. Masvidal lands a short knee as they split apart halfway through. Evangelista throws a looping left, and Masvidal follows it with some nice strikes against the fence. But Evangelista ducks in and gets a takedown. He works from the top, and eventually Masvidal powers back to his feet, clinched with Evangelista. They break around the 1 minute mark and go back to the middle. Masvidal lands a left, and Evangelista briefly loses his balance – perhaps more a slip of his own doing. He stays on his feet and they look to exchange some more. They finish the round without much of consequence. It's a close first round, but MMA Fighting will give the slight nod to Evangelista, 10-9.

Round 2: Evangelista lands a couple short shots. They clinch, and he gets a soft takedown. Back up quickly, they trade kicks and briefly clinch. They dance around, each looking for an opportunity to put something together. The crowd starts to buzz a little with that sense of when-is-something-cool-gonna-happen. Each lands a few shots here and there, but nothing to get the other in trouble. With 1:45 left, Masvidal goes for a takedown and Evangelista has to be warned for fingers in the cage. Masvidal has a good grip on Evangelista and lands a takedown a little bigger than the last one. Evangelista gets back to his feet and throws a nice combo that Masvidal expertly ducks away from. MMA Fighting will give the nod in Round 2 to Masvidal, but it's another mostly tight round.

Round 3: Evangelista throws first to start things off, but lots more dancing and jabbing and kicking that isn't going much of anywhere, or at least putting either fighter in danger. They clinch along the fence, and after the break, Masvidal lands a nice right. They tie up, Masvidal looking for the takedown, and Evangelista is again warned for his fingers in the fence. Evangelista looks to land a knee as Masvidal hangs on. They break with 2 minutes left and the crowd starts to pour on with the boos. A fan yells out "We want the women!" Evangelista throws with a little more abandon now, but he's not landing anything big. Masvidal lands a pair of jabs after ducking out of Evangelista strikes. Evangelista is throwing big, but Masvidal is managing to stay out of the range of most of his power. Masvidal again lands a jab as the 10-second clap goes off. MMA Fighting will give him the third, 10-9, and the fight 29-28. But the scores could very well be all over the map on this one.