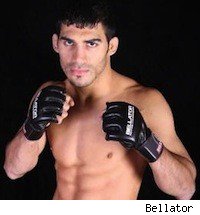 Lyman Good is an "all-in" professional athlete. So consumed is he with reaching his maximum level of ability, the Bellator welterweight often surrenders his Upper East Side New York City apartment for months at a time, sleeping at his gym in lower Manhattan to fully commit himself to training.

Extreme? Perhaps a little, but that's the type of effort he believes it takes to reach the levels he's after.

"It allows me to focus, rid myself of any distractions or anything," Good told MMA Fighting after a recent workout. "A lot of it has to do with sacrifices. I think in the end, a lot of it boils down to who's the one willing to commit himself the most, sacrifice the most and dedicate themselves the most. So the fact that I sleep about three months before the fight in my actual training facility is a good addition to my arsenal. You're either neck deep, or you're not."

That level of dedication has already made Good into a champion. In June 2009, he became Bellator's first ever welterweight titleholder after capturing the inaugural tournament. But he lost the belt last October to former wrestling Olympian Ben Askren.

During the fight, Good (10-1) had his moments, nearly finishing Askren in the final round after an upkick and triangle/armbar submission attempt, but Askren held on to win a decision and take the belt.

It's a loss that still drives Good today.

"Since then, that loss has been a thorn in my side," he said. "I haven't been able to sleep the right way ever since. So being able to fight him again is definitely one of the top priorities in my head. But I can't get ahead of myself and I've got to worry about the three people in front of me before that. Right now, I've got a token dangling in front of me, and the only thing stopping me is three bodies along the way."

First among them is Chris Lozano, an undefeated relative newcomer to the sport who opened many eyes by defeating UFC veterans Jason Dent and Yoshiyuki Yoshida in back-to-back fights. Good faces Lozano at Bellator's season four premiere on Saturday night, an event that airs on MTV2.

The 6-0 Lozano has proven to be a heavy-handed striker, stopping all of his opponents by KO or TKO. Coming off the wrestling-heavy style of Askren, the potential for a standup fight is intriguing to Good, who originally began his training years ago in karate before transitioning to mixed martial arts.

"I know he likes to trade a lot of leather, and so do I," he said. "But I don't want to be single-minded and say that I'm going to go out there and all he's going to try to do is stand up, because I'm sure he'll try and mix a few curveballs in there, and I always try to give the benefit of the doubt to my opponent. I'm never going to predict what they're going to do, but as far as I know, his background is in standup as a kickboxer. He's more of a striker. I'm expecting it to be standing most of the fight, but you never know what's going to happen."

That said, given the accelerated tournament format in Bellator (fighters can compete three times in three months), it's often wise to keep an eye on the future. The rest of the tourney field includes former IFL champ Jay Hieron and judo Olympian Rick Hawn, among others. Good says he's fine with fighting in the tournament again, having learned from his first go-around.

"I can't say I'm completely back at square one, because I feel like this time, I'm bringing with me the experience of having done the tournament format already," he said. "It doesn't give me too much of an advantage over anyone, but it's a good thing for me to be back near square one. I feel like I do better when I'm an underdog trying to prove things to people rather than having pressure on me."

If he keeps winning, however, he knows pressure will follow. Namely, the prospect of a rematch with Askren, the unpredictable wrestler who snapped his win streak.

While the defeat was heart-breaking at the time, Good admits now that the matchup was fun in terms of the challenge, and that he learned more from the single loss than he did out of his 10 combined wins. He cites Askren's "unorthodox" pressure and "funky" style as the hardest things to prepare for, but says he already has ideas on preparing for a potential rematch, including the possibility of getting advisement from Chris Pendleton, a two-time NCAA champion who defeated Askren for both of his titles.

For now, though, that remains a long way off. Good has business to take care of first, and he knows that if his focus is off in the distance, his performance will suffer. But at the same time, Bellator's unique tourney format almost encourages a fighter to see the gold at the end of the rainbow. Right now, Good is just one of eight fighters in the field, but by the fall, he could be back where he wants to be, fighting the brash Askren for the belt that was once his.

"He's a little bit of a self-proclaimed messiah of the sport, but in this type of sport, you need that," he said. "Muhammad Ali wasn't just famous for his fights but his trash talk. He made famous not just himself but anybody he fought against, because he brought the attention, he brought the crowd. The person who beat him was the one that ended up with the last laugh.

"I think me along with Hornbuckle carry the leverage of having fought Askren before," he continued. "So we know what to expect, what kind of pressure to train against. It's kind of hard to replicate the elite level of his experience, but we already fought him. We went five rounds with him and experienced what it was like to go against someone of his level. I have a few tricks up my sleeve as far as how I'm going to prepare for this next time, but that's in the background right now. My main priority is the person in front of me, and I won't worry about Askren until I get there."