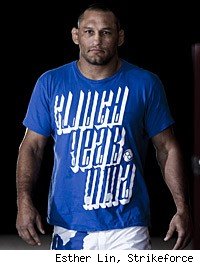 After a February show that kicked off the Heavyweight Grand Prix in style, Strikeforce will do its best on Saturday night to keep the momentum going despite a long delay before the next Grand Prix fight. And the man they'll count on to help them keep the momentum going is the most prominent non-heavyweight the promotion has ever signed: Dan Henderson.

Henderson, whose signing was heralded as a major coup for Strikeforce in 2009, will now fight for the promotion's light heavyweight title after falling short of earning the middleweight belt a year ago. Although Rafael "Feijao" Cavalcante is the champion, Henderson is the undisputed main draw on Saturday night's four-fight Showtime card, which we'll preview here.

What: Strikeforce: Feijao vs. Henderson

When: Saturday, the live Showtime card begins at 10 PM ET.

Rafael Cavalcante vs. Dan Henderson
As a striker, Feijao is outstanding: He's finished opponents with punches, elbows, knees and kicks, and he's coming off the biggest win of his career, a third-round TKO of King Mo Lawal in August. On the ground, I don't think is much of a threat for Henderson, although it's worth noting that three of Feijao's coaches are the only three people ever to submit Henderson: Anderson Silva, Antonio Rodrigo Nogueira and Antonio Rogerio Nogueira.

But as good a striker as Feijao is, Henderson has a great chin, and so I don't think Feijao will finish him. Instead, I see Henderson landing a big right hand at some point and knocking Feijao out. Henderson won the Rings King of Kings Tournament early in his career and the Pride middleweight and welterweight titles in the middle of his career, and now a victory over Feijao can give Henderson one more championship late in his career. I think he'll get it.
Pick: Henderson

Marloes Coenen vs. Liz Carmouche
Carmouche took the fight on short notice after Miesha Tate dropped out, and although she's already put together an impressive 5-0 record less than a year after first becoming a professional fighter, I don't think she's ready for someone of Coenen's experience. Coenen will finish Carmouche on the ground.
Pick: Coenen

Tim Kennedy vs. Melvin Manhoef
Manhoef is one of my all-time favorite fighters for his straightforward, hard-striking style. But he's a kickboxer who never bothered to learn the ground game in MMA, and it has cost him repeatedly, as he gets worked as soon as the fight goes to the ground. He's also 34 years old and not aging particularly well. All those battles have taken a toll on Manhoef, and he's lost his last two MMA fights as well as his last two kickboxing matches.

Kennedy, who was last seen losing to Jacare Souza in a middleweight title fight, has a well-rounded ground game and should be crafty enough standing up to avoid getting hit by one of Manhoef's big bombs. Anyone could get knocked out against Manhoef, but I see Kennedy taking Manhoef down and submitting him.
Pick: Kennedy

Billy Evangelista vs. Jorge Masvidal
The 11-0 Evangelista is getting his first shot at a big-time Strikeforce show after fighting on Challengers cards in the last couple years. Masvidal, who was most recently seen losing a decision to Paul Daley, is always a game opponent. But I don't think he's the man to give Evangelista his first loss.
Pick: Evangelista